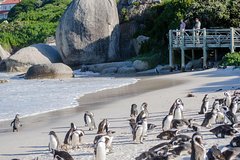 Enjoy the scenic and picturesque Chapman's peak drive along the Cape coastline as you make your way to the Cape Peninsula.

Arrive at Cape Point which is the south western most point of Africa. Take a tram or flight of stairs up the lighthouse built in 1859 and enjoy the breathtaking scenery.

Cape Point and the Cape of Good Hope are situated within the Table Mountain National Park which is home to an abundance of flora and fauna.

Drive up to the Boulders Penguin Colony in Simon's Town which is home to one of the few land-based Penguin colonies in the world. The penguin colony consists of 3 pristine beaches, 1 penguin viewing area and 3 boardwalks which allow tourists to view and take up close pictures of the penguins in their natural habitat.

The park entrance fees are included in this package.

Boulders Penguin Colony in Simons Town is home to a unique and endangered land-based colony of African Penguins. This colony is one of only a few in the world, and the site has become famous and a popular international tourist destination.

Cape Point is a promontory at the southeast corner of the Cape Peninsula, which is a mountainous and scenic landform that runs north-south for about thirty kilometres at the extreme southwestern tip of the African continent in the Republic of South Africa.