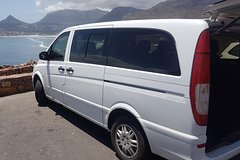 Arrive in the historic Simons Town with ancient granite boulders which protect it from the wind and large waves, making it an ideal swimming spot while enjoying your time with penguins.

Founded in 1913 in an effort to preserve South Africas unique flora, the gardens encompasses five of South Africas six different biomes and is world renowned for the beauty and diversity of the Cape Flora it displays as well as for the magnificence of its setting against the eastern slopes of Table Mountain.