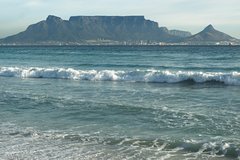 We visit and see every important tourist attraction that Cape Town has to offer literally in one day, ideal and especially for tourists with time constraints

Warm water proof clothing in winter is a must though even in the middle of summer it can get very cold on top of Table Mountain and suntan lotion is recommended.

The historic Castle, Cape Towns oldest building and initially a fort with an extraordinary history having served as the seat of government and military operations for over two century`s including being the gallows for a period in time.

The District 6 Museum was established in 1994 to commemorate the forcible removal of its occupants by the then apartheid government in 1965 declaring the area a white  only zone, and still remains a festering sore to this day.

Signal Hill and the firing of the Noon Gun which has been a part of Cape Towns history since the 18th century and was used as a look out for enemy ships as well as a time piece for the burgers of Cape Town, it also alerted farmers that a ship was about to anchor in the harbor where they could sell their wares, fruit, vegetables and fresh meat

The Bo-Kaap,originally the home of the Malay Quarters and today is the prominent housing complex or suburb of the original Cape Malays and represents mostly the Moslem Community. We visit the Bo-Kaap Museum and take a walk about.

The Company Gardens for lunch at the Company Gardens Restaurant, after lunch we visit the Slave Lodge with its sad reminder of mans cruelty and inhumanity to man, followed by a look in at the magnificent St. Georges Cathedral and then we walk to Green Market Square the historical square in the center of Old Cape Town built in 1696 where a burgher watch house was erected, over the years it has served as a slave market, vegetable market, parking lot and now a flea market, from their we take a walk past the Groot kerk and through the Company Gardens exploring approximately 368 years of Cape Towns existence, the Houses of Parliament, S.A. Museum ending our tour at the Jewish Halo Cast Museum a very sad but must see.

V & A Waterfront to visit the Chavonnes Battery Museum if time allows, alternatively for sundowners while watching the ships coming in and out of the harbor