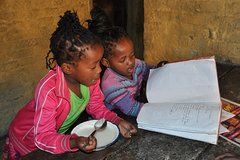 Khayelitsha is the biggest township in Cape Town by population. A township is a high density area and is normally home to the poorest of the poor. Khayelitsha is home mainly to the Xhosa people from the Eastern Cape but is a cultural melting pot - it also has a very small coloured population and foreigners which in the past has resulted in homophobic attacks.

On entering Khayelitsha you will be greeted by shacks especially along the National Highway. Across the Highway would be upmarket houses. It really is a tale of two cities. The National Highway illustrates why South Africa has one of the greatest gaps between the poor and the rich.

Despite the poverty issues, Khayelitsha has a rich and vibrant culture. Its known for its vibrancy and love of South African music as evidence by the birth of Rands lifestyle space in Khayelitsha in 2015. You will experience music, bear and African food in a friendly and safe atmosphere. A tour to Cape Town is not complete without a visit to Rands.

- Get a bird eye's view of Khayelitsha township from Lookout Hill. Our guide will narrate to you a history of events that shaped the culture of Khayelitsha. Also learn how apartheid marginalized blacks from the society.

- Drive to Town 2 for a local mouthwatering braai (barbecue)
- Visit Rands Lifestyle a place for fun seekers where music is played in an open space and there is merry making and drinking the African way
- Experience how African food is cooked and eat your lunch the African way using hands (not fork and knife).