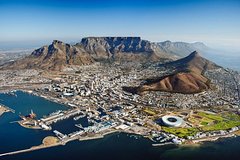 Resting at the confluence of the Indian and Atlantic oceans, sandwiched between the slopes of the iconic Table Mountain and the glistening sapphire waters of Table Bay, the exceptionally scenic city of Cape Town is in a class of its own. Some cities boast rich culture, vibrant nightlife, a cosmopolitan atmosphere and extraordinary architecture, while others boast breathtaking landscapes and extraordinary natural wonders. Cape Town is lucky enough to be blessed with all of these attractions and so much more. With its bustling harbour, world-class beaches, top-notch vineyards, and its mountainous surroundings brimming with diverse flora and fauna, Cape Town consistently captivates the hearts of all who visit.

Day 1: Cape town City Tour with a visit to bokaap

Pass By: Bo-kaap, Cape Town Central South Africa
On arrival at Cape Town Airport you are met by your guide and taken on a City Orientation Tour before going to your hotel to check in.The colourful suburb of Bo Kaap was exclusively for coloured Muslims during the Colonial and Apartheid times and today, this group still makes up the majority of residents. The quaint cobbled streets, the museum, the authentic purveyors of Cape cuisine and Cape Towns oldest spice emporium are all worth a visit.

Pass By: Company's Gardens, 19 Queen Victoria Street, Cape Town Central 8001 South Africa
The Company Gardens is a treed haven in the middle of the city and is surrounded by museums and fascinating buildings - St Georges Cathedral, the Salve Museum, The National Art Gallery and the Jewish Museum to mention a few.

Day 2: Cape Peninsula Tour with cape point and hout bay and the penguins

Stop At: Seal Island, False Bay South Africa
• Today you have a full day tour visiting some of the highlights of the Cape Peninsula.
• This morning you are collected from your hotel for a full day Cape Point Tour.
• Highlights include; A boat cruise to Seal Island, a drive along the scenic Chapman's Peak, a visit to Boulders Penguin Colony, and lastly a visit to Cape Point Nature Reserve with its magnificent views and two lighthouses
Trips departing from Hout Bay Harbour ferry passengers across to nearby Duiker Island  also known as Seal Island  where thousands of Cape Fur Seals can be seen in their natural habitat. The boat trip provides beautiful views of the bay, the harbour, The Sentinel and Chapmans Peak.
Duration: 2 hours

Pass By: Chapman's Peak, Hout Bay South Africa
Chapmans Peak Drive winds it way between Noordhoek and Hout Bay. Situated on the Atlantic Coast, at the south-western tip of South Africa, it is one of the most spectacular marine drives anywhere in the world. The 9km route, with its 114 curves, skirts the rocky coastline of Chapman's Peak. The drive offers stunning 180° views with many areas along the route where you can stop and take in the scenery or sit down for a relaxing picnic

Stop At: Old Cape Point Lighthouse, Cape Point Nature Reserve, Cape Point South Africa
The Flying Dutchman funicular takes visitors at Cape Point up to the lighthouse, where there is an outstanding view of the point and ocean. The funicular is named after a ghost ship whose destiny it is to sail the oceans forever. More information can be found at the museum
Duration: 1 hour

Stop At: Cape Point Nature Reserve, Cape Town Central South Africa
Cape Point is a spectacular sight, covered in endemic fynbos and home to breathtaking bays, beaches and rolling green hills and valleys, just 60km outside of Cape Town. Cape Point falls within the Cape Floral Region, a World Heritage Site. The Cape Floral Region is one of the richest areas for plants in the world  it is home to nearly 20% of Africas flora. Cape Point is open daily and is a must-see.
Duration: 4 hours

Stop At: Boulders Beach Penguin Colony, Simon's Town 7995 South Africa
The Boulders Visitor Centre is home to the famous colony of Jackass Penguins, so called for their hilarious braying call. This is a truly special experience and Table Mountain National Park staff are knowledgeable and offer guided tours. After you have fallen in love with the penguins head to the secluded Boulders Beach and take a swim in the comparatively warm waters of the False Bay.
Duration: 2 hours

Stop At: Franschhoek Cellar, R45, Franschhoek, 7690, South Africa
Idyllically situated in the Cape Winelands, this peaceful country retreat is one of the oldest towns in South Africa. The once sleepy little village was named Franschhoek, meaning 'French Corner' as it was founded by French Huguenots. The fertile valley of Franschhoek boasts a rich heritage showcased at the fascinating Huguenot Memorial Museum and the Cape Dutch architecture in much of the village remains remarkably well preserved. The towns proximity to Cape Town allows for pleasant day trips during which visitors can explore the areas many world-class wine estates and impressive range of excellent restaurants or simply browse the quaint, upmarket boutiques strewn along the towns lovely tree-lined avenues.
Duration: 2 hours

Stop At: The Stellenbosch Village Museum, 18 Ryneveld Street, Stellenbosch 7600 South Africa
The recorded history of Stellenbosch goes back to 1679, when it was discovered by the Capes first governor, Simon van der Stel, who earmarked it as a fertile valley ideal for agriculture and coined its name (a Dutch derivative of van der Stels bush). Along with Constantia, Stellenbosch was one of the earliest wine regions in the country, and to this day, continues to produce a kaleidoscopic range of fine wines. Historical tours of the town take in it many well-preserved old buildings, some constructed as early as the 18th century.
Duration: 2 hours