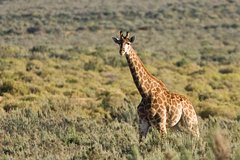 Enjoy an unforgettable African Big Five Safari in a malaria-free environment approximately 2,5 hours drive from Cape Town. The Africa Big Five and a large variety of re-introduced game can be viewed in their natural habitat.

You will be collected from your hotel and transferred to the Game Reserve which is a 2.5 hr drive via vineyards, orchards and magnificent scenery. Upon arrival at the reserve you are welcomed with a chilled drink before being ushered through to the restaurant for a buffet breakfast. Around 10h15 you depart on a 2 to 3-hour open vehicle game drive through the reserve. Having been proclaimed a nature reserve in 1985, the veld (terrain) is in pristine condition, consisting of Renoster veld, Mountain Fynbos and succulent vegetation types found in 3 beautiful valleys. Situated in the Karoo with its wide-open spaces, the 4,500 hectare reserve has a natural wetland and is protected by majestic mountains and valleys which makes for varied and ideal game viewing. On your drive you may see lion, elephant, buffalo, rhino, as well as giraffe and hippo and other herd game such as Black Wildebeest and Burchell's Zebra as well as various antelope species. The natural wetland is home to 172 species of birds and is also home to several breeding pairs of the rare and endangered black eagle, after which the reserve has been named. Following the game drive, you will have the opportunity to visit the Eco-Synergy centre where the aim is creating job opportunities to the community of Touws River and far beyond.