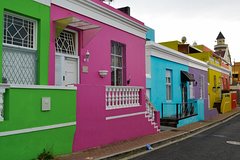 Explore the culinary side of Cape Town on this guided cycling tour of Cape Town, with stops to taste South African dishes along the way. Discover traditional food such as boerewors, samosas and koeksisters in the Bo Kaap neighborhood and at the V&A Waterfront.

Depart central Cape Town (corner of Loop and Waterkant Streets) around 9:30 a.m. for a private four-hour cycling tour of Cape Town. A guide will point out some of Cape Town's important cultural sites and stop for some of it's best dishes in the colorful Bo Kaap neighborhood and at the vibrant V&A Waterfront. Try dishes such as Boerwors (traditional sausage) rolls, samosas (Indian-influenced vegetable and meat pockets) and doughnut-like koeksisters.

Guests must be able to cycle at least four miles (6 km) and be at least 16 years old. The tour runs with a minimum of two people and includes the fully guided tour, bike and helmet rental, a snack pack, bottle water and all the food tastings along the route.