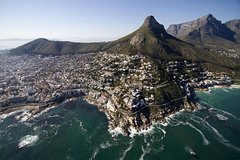 Head to the skies on a 20-minute helicopter tour from Cape Town, and soar above the Atlantic coast, known locally as the Atlantic Seaboard. Leaving the V&A Waterfront, enjoy incredible views of the City Bowl  a tantalizing sign of the good sights still to come! Circle Table Mountain and glide over dramatic stretches of coastline, comprising sandy beaches framed by mountains and, of course, the dazzlingly blue Atlantic Ocean.

Check in at the V&A Waterfronts helipad, and then board your helicopter to head to the skies of Cape Town!

Leaving the V&A Waterfront and its busy harbor behind, your first airborne view is the magnificent City Bowl, unfolding in front of your eyes. The stunning amphitheater-shaped bowl is framed by Table Bay, and bordered by several of Cape Towns most famous mountain peaks. As you soar through the skies, your pilot will give a running commentary to make sure no points of interest are missed out!

Fly over Cape Town Stadium at Green Point, which hosted the 2010 FIFA World Cup, before starting a 360-degree circuit of iconic Table Mountain. Soak up incomparable views of Cape Towns tallest mountain, and then compare the earthy colors of nearby Signal Hill Mountain with the striking blue of the Atlantic Ocean below.

After gliding past Lions Head, another mountain, soar above the Atlantic Seaboard. If visibility is good enough, you should be able to catch a glimpse of tiny Robben Island in the distance.

This famous stretch of coastline weaves underneath the shadow of the Twelve Apostles, the mountain range that runs along the Cape Peninsula. See immaculate sandy beaches lining the coast, and watch out for Camps Bay beach and the luxurious homes of Clifton Beach and Llandudno Beach.

After passing close to Karbonkelberg Mountain, see the sea stretching in front of you and glide above Hout Bay Harbour. After roughly 20 minutes of exploring the skies, you touchdown back at the helipad.