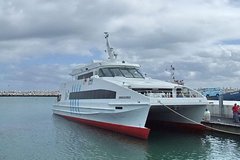 Experience the 114 curves and 9km drive of one of the world's most scenic and majestic drives - Chapman's Peak. Hop off at one of the many picnic spots where you can enjoy and take photographs of the breathtaking views of the rugged cliffs, the beaches, the ocean, whales and dolphins!
See the spectacular sight of Cape Point's towering rock cliffs, the lighthouse which is situated 238m above sea level, over 250 species of birdlife, baboons, bucks and the Cape Mountain Zebra. Explore the Cape of Good Hope, a world-renowned landmark, and monuments in honour of two of the world's most famous explorers - Vasco da Gama and Bartolomeu Dias
Visit the Jackass penguins at Boulders Beach in Simon's Town, which has grown rapidly since only two Jackass penguins settled in Boulders Beach that arrived from Dyer Island, near.

Experience
Highlights
We wiil Book and reserve you a boat trip ticket ptivate tour for Robben Island and see the cell where Nelson Mandela was imprisoned in the Apathead colony.
Full descriptionClimb aboard the ferry at the V&A Waterfront and sail to Robben Island. Then, take a bus trip around the island in the company of a former political prisoner. Look inside the cell where Nelson Mandela was kept prisoner for 18 years. then he have been changed to the Differance prison in total sentence of 27years.
ROBBEN ISLAND TOUR Details
This full-day Cape Town excursion offers two tours wrapped into one. With round-trip transportation from your hotel, part 1 takes you via ferry
The museum has a range of venues for hire, from the modern Nelson Mandela Gateway, to the aforementioned comfortable and practical historical buildings on the island, to the Robben Island Museum facility in the V&A Waterfront. All standard conference equipment is on offer, as is basic to luxury catering, transportation to, from, and on the island.

Table Mountain Cable Car
08h00 or 09h00
To 17:00PM
Table Mountain Cable Car
Cape Point private tour including the colourful houses in the Bo Kaap, cable car ride up and down Table Mountain, scenic drive along Chapmans Peak and a visit to Boulders Penguins colony from Cape Town. This tour includes entrance fees to places of interest as per the itinerary.
What you can expect:
Pick up will be at 9:00am from guests hotel in Cape Town and surrounds. The first stop will be in the Bo Kaap (Cape Malay Quarters) to view the colourful houses, learn about their history and take some photos. Thereafter, we travel to the Table Mountain cableway station to take the cable car to the top of Table Mountain. Guests receive a guided tour of the mountain and see Cape Town from another dimension. We return to the bottom via the cable car. After this unforgettable experience we proceed along the Atlantic Seaboard, with the mountains on one side and the ocean on the other. We stop at Maidens Cove for a photo opportunity with the backdrop of the 12 Apostles mountain range. Passing through Clifton, Camps Bay, Llundadno and Hout Bay, we stop for a photo at the view point on one of the worlds most scenic routes  Chapmans Peak drive. We continue to Simons Town and meet the monument of Just Nuisance  the Great Dane dog who made a name for himself in the South African Naval Base. Next, we stop at Boulders Penguins colony to visit these enchanting creatures. You may find them adorably playing in the ocean. Our final destination is the Cape of Good Hope nature reserve for a guided tour and a photo stop at this very popular landmark. From there we travel to Cape Point, where guests can hike to the top of the lighthouse or take the Funicular to the top instead. Our return route is via the Old Cape Road with a drop off at guests accommodation between
Inclusions
Pick up and drop off at accommodation (Cape Town & surrounds). Private tour guide/driver. Private luxury vehicle and Fuel. Entrance fees to Table Mountain; Chapmans Peak drive; Boulders Penguins colony and Cape of Good Hope nature reserve.