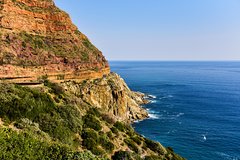 Cosmopolitan Cape Town is widely regarded as one of the worlds most beautiful destinations. The city offers a mild Mediterranean climate.

Known as the Mother City and is the legislative Capital, Cape Town is the hub of the Western Cape Province. Cape Town has developed into a major tourist hub for the cultural and sport enthusiasts.

Nowhere else in the world will you find such bio diversity and natural beauty. The Peninsula boasts over 2250 wild flower species, African penguins, scenic mountain passes, dramatic seascapes and superb white beaches.

Guests will be collected from this point or a mutually beneficial alternative location in the Cape Town CBD for the start of the tour.

A quick stop for a coffee break and leg stretch while enjoying the views of the historical Simon's Town Naval Base.

Photo opportunity at the most South Western point at the tip of the African continent.

Scenic drive back to your accommodation anywhere in the Cape Town CBD.