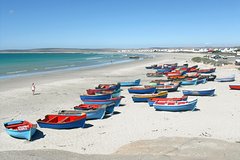 Enjoy a full day Cape West Coast private tour in a private vehicle, in a circular route beginning in Cape Town on the R27 and returning on the R45 filled with lots of scenery, activities, and discovery. Experience seaside fishing villages in Yzerfontein, Paternoster and Langebaan where you can enjoy fresh Seafood, interact with locals at !Khwa ttu and discover a part of the West Coast National Park with its carpet of Daisies in Springtime (August and September). See the wheat region in the Swartland and do some wine tasting in Darling.

You will be collected from your Hotel/Guesthouse and drive along the R27 on this private Cape West Coast tour. You will pass through Bloubergstrand (translation: Blue Mountain) and Big Bay. From this area, you will have one of the best views and photo opportunities of the majestic Table Mountain and a clear view of Robben Island.

Turning off the R27 towards the R307 we head towards Darling, passing the towns of Atlantis and Mamre. In Darling you will do some Olive Tasting.

From there you will continue on the R315 and re-connect with the R27 for a stop at !Khwa ttu. Take a San people cultural experience starting at 10:00 am with the following highlights:

This is a fascinating insight into the culture, heritage, knowledge and modern-day life of the San of southern Africa led by a qualified San Tour Guide. The San people will show off their skills, share their ancient knowledge about history, tracking animals and identifying plants. You will learn words in some of their languages. This experience provides an opportunity for you to listen to accurate accounts of the past and present lives of the San.

Back on the R315, only during Whale season, you will drive toward the fishing village of Yzerfontein, where you may be lucky to view some Whales.

From there you'll proceed to the West Coast National Park. It is said that here is where Eves footprint was discovered  one of the earliest discoveries of human existence. One can also view animals and a large community of birds at this park. Flowers are the most beautifully bloomed (the Daisies create carpets of flowers) in the Springtime (August and September).

A short drive after departing from the National Park, you'll reach the town of Langebaan. This is one of the oldest towns in South Africa and also known as the JEWEL of the Cape West Coast. It is a popular holiday destination for South Africans.

After optional lunch along the way either in Langebaan or Paternoster (at own expense) you will make your way back via the R45. Along this route, you will stop at the West Coast Fossil Park for a look at the greatest diversity of 5 million-year-old fossils.

Pass Langebaanweg Airforce Base (flying school), the town of Hopefield (optional stop at Simply Bees Wax for Honey) and the Wheat and Canola region of Moorreesburg and Malmesbury. Guests have the option of the Wheat museum in Moorreesburg, Wine tasting in Malmesbury or see the ostriches at the Ostrich Farm in Philadelphia before you arrive in Cape Town.

You will be dropped off at your Hotel/Guesthouse in Cape Town at the end of the tour.

For the adventurous, there are numerous options from Horseback Riding Canopy tours to Sea Kayaking and Sky Diving on this Cape West Coast.