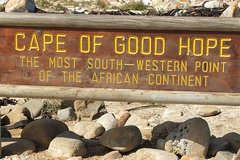 This 8-hour panoramic tour for couples or small groups in a luxury minibus or small coach starting at 9h00 takes you along one of South Africa's Premier Routes to Cape of Good Hope the "mythical place where the two oceans meet" The road meanders all along the coastline and a major stop is at Hout Bay for an optional ferry-ride to Seal Island or for Craft Market Shopping.

The spectacular Chapman's Peak Mountain Drive is next whereafter stunning views of numerous beaches follow. Cape of Good Hope as well as Cape Point will be visited. An optional Funicular Ride to the lighthouses can be done at Cape Point..

One of South Africa's most beautiful mountain drives.

The mythical place where "the two oceans meet" Funicular is an optional extra to take you to the lighthouse.Visit Cape Point as well as the South Westernmost Point of the African Continent.

Visit the African Penguin in its natural habitat- 100's of Penguins to be seen.

Stop for pictures at this stunning viewpoint overlooking Camps Bay

Drive along the Atlantic Coastline and have a view of these 4 pristine beaches from the road.

Drive to this viewpoint above the beautiful Muizenberg to spot the hundreds of surfers down below. Even see a "Shark Watcher"

Visit the biggest Botanical Gardens in the Southern Hemisphere.

See the fantastic tourism development in the center of Cape Town.

Opportunity to take Funicular to the lighthouse (optional)