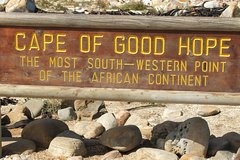 This 8-hour panoramic tour for small groups maxmum 10, minimum 2 in a luxury bus starting at 9am takes you along one of South Africa's Premier Routes to Cape of Good Hope the "mythical place where the two oceans meet" The road meanders along the coastline and a major stop is Hout Bay for an optional ferry-ride to Seal Island or Craft Market Shopping.

Chapman's Peak Mountain Drive is next. Cape of Good Hope and Cape Point will be visited. Optional Funicular Ride to lighthouse at Cape Point..

Stop at Boulders beach for visit to Penguin Colony(own account) or craft market shopping.Kirstenbosch Botanical Gardens next for a circular walk(own account).

Return for drop off 5pm.

Experience one of the most beuatiful mountain passes in South Africa outside Cape Town.

See the African Penguin in it's natural habitat on Boulders Beach, Simon's Town.

Visit the mythical place where the "two oceans meet" Spot wildlife like Eland, Ostrich, baboons in the reserve and visit Cape Point and Cape of Good Hope.

A very beautiful picture stop overlooking the "Twelve Apostles" ,backside of Table Mountain as well as the stunning beach and area of Camps Bay.

A number of gardens within one garden with inclusion of "Snake Walk" and Sculpture Garden to name a few.

See 100's of Cape Fur Seals in their natural habitat.