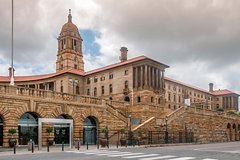 Pretoria is a city located in the northern part of Gauteng Province, South Africa. The city is situated about 50km north of Johannesburg. It is one of the country's three capital cities, serving as the executive (administrative) and de facto national capital; the others are Cape Town, the legislative capital, and Bloemfontein, the judicial capital.

is a unique Monument which commemorates the Pioneer history of Southern Africa and the history of the Afrikaner and is situated in a beautiful setting.

The Monument was inaugurated in 1949. It was designed by architect Gerard Moerdijk. In the Hall of Heroes is the worlds longest historical marble frieze. A tapestry with more than three million stitches is housed in the Cenotaph Hall.

Today it is the most visited heritage site of its kind in Gauteng and one of the top ten cultural historical visitor attractions in the country. It is also the only Grade 1 national Heritage Site in Pretoria

Kruger House is the historical Pretoria residence of the Boer leader and President of the South African Republic, Paul Kruger. It was built in 1884 by architect Tom Claridge and builder Charles Clark. Milk was used, instead of water, for mixing the cement from which the house was constructed, as the cement available was of poor quality.

The house was also one of the first in Pretoria to be lit by electricity. The house contains either the original furnishings or items from the same historical period, some of the many gifts that were presented to Kruger as well as other memorabilia.

The Union Buildings form the official seat of the South African Government and also house the offices of the President of South Africa. The imposing buildings are located in Pretoria, atop Meintjieskop at the northern end of Arcadia, close to historic Church Square and the Voortrekker Monument.