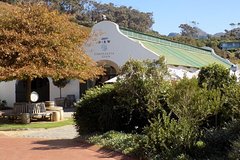 About Constantia
Constantia is the oldest wine producing region in the Southern Hemisphere. This wine tour lets you step back in time to taste some of the most famous wines ever produced in South Africa.

In 1685 Hendrik Van Rheede to Drakenstein granted the grounds of Groot Constantia to Simon Van Der Stel the VOC Govender of the Cape of Good Hope .

Van Der Stel built the house with slave labour and planted vineyards, fruit and vegetables and raised cattle there on.

Beau Constantia Wine Estate - Situated at the top of Constantia Neck, Beau Constantia boutique wine estate has some of the Cape`s steepest agricultural slopes. situated between the Constantia and Table Mountain ranges visitors have a spectacular view of both the Indian and Atlantic Oceans from the modern, two level glass enclosed tasting room, below which they have a wine bar, craft beer and sushi on offer- Current Owners are Apostax (Pty) (Ltd). - Winemaker - Justin van Wyk - annual production 4,000 cases made up of 80% red wines and 20% White wines - known for Viognier white and red blends. - Restaurant - Chef`s Warehouse and chef`s are Liam Tomlin and Ivor Jones.

Lunch at Cape Point Vineyards - Founded by businessman Sybrand van der Spuy in 1996 , voted winery of the year in 2008, the views from Cape Point Vineyards are simply spectacular, situated between the Indian and Atlantic Oceans and buffeted by cool breezes from both oceans the vines are ideal for the production of world-class Sauvignon Blanc and Semillon. Duncan Savage has been the winemaker for the past 11 vintages with remarkable success, over the past decade Cape Point Vineyard has achieved 11 5  star ratings from the john Platter Guide and 12 trophies fronm the Old Mutual Trophy Wine Show. With a superb restaurant that includes cheese/ antipasta platters , picnics, breakfast , deli and sundowners, Cape Point Vineyards as them all, even caterin for weddings& events  Winemaker  Riandri Visser  Viticulturist - Stephan Lochner, 22ha under vine - 16,000cs - own label 100% white