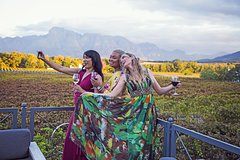 The Cape Winelands is probably one of the most beautiful countrysides in the world, with views of mountains, oceans and vineyards. Learn about the heritage of the Constantia Winelands on our private tour and visit the 4 wine farms which originally formed part of the The Simon van der Stel Constantia wine farm: Groot Constantia, Klein Constantia, Buitenverwachting and Constantia Glen. We recommend enjoying a beautiful lunch overlooking the vineyards and pairing it with some of the best wines produced in South Africa.

After pick up at your accommodation in Cape Town at 9:30am we will set off on our Constantia Winelands private tour which we have dubbed: The Simon van der Stel wine tour.
We will travel from Cape Town along the M3 passing Rhodes Memorial and the University of Cape Town (UCT) and proceed on the M41 to our first wine stop for the day which is Constantia Glen wine estate.

Perched high up on the hill with amazing views of mountains and vineyards, Constantia Glen was originally part of the Simon van der Stel farm. After undergoing farming changes including forest hills farming and cattle stud farming, it returned to its original farming of wine. The wine production is 70% Red and 30% White cultivars.

We then proceed to the historical Groot (meaning Big) Constantia wine estate. Groot Constantia is the oldest wine producing farm in South Africa since 1685 and even after the farm had changed ownership, it still maintains the production of high quality, award-winning wine. The farm produces 70% Red and 30% White cultivars. We can recommend a beautiful lunch either at Simons Restaurant or at Jonkershuis Restaurant, both set on this exquisite wine estate.

We end off our Simon van der Stel wine tour with Buitenverwachting (meaning Beyond expectation) wine estate. This too, had formed part of the original Constantia farm which was found by Simon van der Stel. Even though it changed ownership, they retraced the roots of the estate and restored the historical buildings on the farm. The farm produces 8 % Red, 90% White and 2 % Rose cultivars. From there we make our way back to Cape Town where guests will be dropped off back at their accommodation.