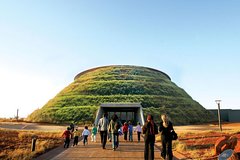 Get up close to the  "Cradle of Humankind" on a half-day  tour from Johannesburg. This extremely important archeological site currently occupies an area of 47,000 hectares. Its name reflects the fact that the site has produced a large number of and some of the oldest hominin fossils ever found. Know the complex of limestone caves including the Sterkfontein Caves where the 2.3 million-year-old fossil Mrs. Ples was found in 1947. Includes roundtrip  transportation from the airport or your hotel.

The "Cradle of Humankind" was declared a World Heritage Site by UNESCO in 1999 and is located about 50 kilometers northwest of Johannesburg, South Africa, in the Gauteng province. This site currently occupies 47.000 hectares and contains a complex of limestone caves.

The Sterkfontein Caves contain the discovery of a 2.3-million-year-old fossil Australopithecus africanus (nicknamed "Mrs. Ples"), found in 1947 by Robert Broom and John T. Robinson. This important discovery helped to corroborate the 1924 discovery of the juvenile 'Australopithecus africanus' skull, "Taung Child", by Raymond Dart, at Taung in the North West Province of South Africa, where excavations still continue.

Nearby the site, but not in the site, the Rising Star Cave system contains the Dinaledi Chamber ("chamber of stars") in which were discovered fifteen fossil skeletons of extinct species of hominin, provisionally named 'Homo naledi'.

Sterkfontein alone has produced more than a third of early hominid fossils ever found prior to 2010. The Dinaledi Chamber contains over 1500 'H. naledi' fossils, the most extensive discovery of a single hominid species ever found in Africa.