Cradle of Humankind and Maropeng Day Tour from Johannesburg 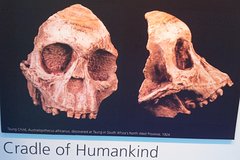 Cradle of Humankind and Maropeng Day Tour from Johannesburg

Depart from your hotel in Johannesburg to The Cradle of Humankind and Maropeng to discover many hominid and other animal fossils, dating back more than 4-million years, to the birth of humanity. The most important and most famous of these fossils are Mrs Ples, a 2.1-million-year-old Australopithecus skull, and Little Foot, an almost complete Australopithecus skeleton that is more than 3-million years old. These fossils, both found in the Sterkfontein Caves in the Cradle of Humankind, tell us much about the precursors of modern humans, Homo sapiens. With a Guide, you will be able to go underground tour.

The scientific exhibition centre showcases a reconstruction of a mined cave (versus a pristine cave), cave formations and geology, early life forms, mammals and hominid fossils. It describes in detail important finds such as Mrs Ples, the Taung Child and Little Foot, as well as providing information about fossilization, palaeobotany and landscapes.

Enjoy your complimentary hotel pick-up from Johannesburg hotel before heading to the The Cradle of Humankind - declared a World Heritage site in 1999 , a 47 000 - hectares area in the western part of Gauteng Province with around 40 different fossil sites where several of the world's most famous and important fossils have been discovered.

With your guide, you will enjoy a drive of 2:30 hour drive, seeing scenery mountains along the road before you arrive at the site. Upon arrival you will be briefed by a site guide and taken underground for a visit

Conclude your tour back in Johannesburg.