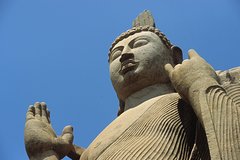 This memorable tour takes you to see some of the historic highlights of Sri Lanka. Explore cultural sites in Anuradhapura, including Sri Maha Bodhi and Thuparamaya. Visit the famous perfectly sculpted Aukana Buddha Statue. Get to know more about historical Sri Lanka with this tour. SKU: LK60061800

The construction of Ruwanweliseya was prophesied by the great Buddhist missionary Maha Thera Arhath Mahinda, who brought Buddhism to Sri Lanka from India during the reign of King Devanampiya Tissa (250-210 BC).

Having heard of the prophesy of Maha Thera Mahinda to the effect that a great Stupa would be built by a great king at a certain location at Anuradhapura, King Devanampiya Tissa had an inscription pillar planted at the said location narrating the prophesy.

A little more than a century later, the inscription pillar was destined to be found by a fitting hero: King Dutugamunu (101-77 B.C.), who rescued the Sinhalese Buddhist nation from the Dravidian invader. The Hero of the Nation wasted no time and commenced the construction of Ruwanweliseya also named Maha Stupa or Ratnapali Stupa or Swarnamali Stupa.

Following the declaration of the king that no work at the great stupa should go unrewarded, a streak of luck dawned on the pious king: a rich vein of Silver was discovered at a village subsequently renamed Ridigama meaning Village of Silver in Sinhala. The construction of the stupa cost the king 6.4 million coins in wages alone.

Standing at a circumference of 370 feet and a height of 180 feet, Ruwanweliseya, the third largest stupa of Sri Lanka, is the focal point of the Maha Vihara, the first monastery of Sri Lanka. It is believed that a considerable amount of relics of Buddha is enshrined in this glorious stupa, built in replicating the shape of a bubble of water. At the eastern entrance to the stupa is a statue of King Dutugamunu. According to the records made by Fa Hsien, the Chinese Buddhist monk, who toured Sri Lanka in the 5th century CE, Maha Vihara monastery housed no less than 3000 Buddhist monks.

Since the death of King Dutugamunu, The Hero of the Nation, the great stupa had been renovated by a succession of Sinhalese kings till King Nissanka Malla (1187-1196 AC). By the 19th century, Anuradhapura, once the greatest monastic city of the world, also named Anurogrammon, by the Greek cartographer Claudius Ptolemy (90-168 AD) was deserted; Ruwanweliseya was in ruins.

In the year 1893, a patriotic and pious Buddhist monk called Naranvita Sumanasara Thera supported by a community of humble villagers in the region, took upon the Herculean task of reconstructing the great stupa. The community resulted in forming a society called Ratnamali Chaityawardhana Society.

It is hard to believe  but there is no shadow of doubt at all  that this small tree with limbs so slender that they must be supported on iron crutches, is the oldest historically authenticated tree in the world (2,250 years).

It has never since been without its hereditary attendants and care, to the very end, of the countrys kings. As lately as the reign of King Keerti Sri Rajasingha, a wall was built around the tree. In 1966 it was enclosed with a golden railing.

The sapling was brought to Sri Lanka by Buddhist nun Sanghamitta, the daughter of King Asoka of India during the 3rd Century B.C. To the north of the well protected and well adorned tree are three great monasteries: the Mahavihara, the Abhayagiri and the Jetavana.

The Jetavanarama Dagobas massive dome rises above the entire eastern part of Anuradhapura. Built in the 3rd century by Mahasena, it may have originally topped 120m, but today is about 70m  similar to the Abhayagiri. When it was built it was almost certainly the third-tallest monument in the world, the first two being Egyptian pyramids.

Its vast, bulbous form is unplastered and said to consist of more than 90 million bricks.

Abhayagiri Monastery spreading over an area of 200 hectares, was founded by King Valagamba also known by Vattagamini Abhaya (109 BC-89-77 BC) following his ascent to the throne for the second time, having the Dravidian invaders put to sword and fire. The monastery was built following the destruction of the Jain hermitage, whose ascetic Giri had taunted King Valagamaba while he was fleeing from invaders from Southern India 14 years back. The monastery was donated to Buddhist monk Thera Mahatissa as a token of gratitude for the moral and material support extended to the king, at a time of adversity, in exile building an army to regain his kingdom.

The main stupa at Abhayagiri Monastery , Abhayagiri Stupa was built over a footprint of Buddha. The Bo tree at the monastery is an off-shoot of the Sri Maha Bodhi tree also at Anuradhapura. Standing at 370 ft in height, when it was first built, Abhayagiri Dagoba was the second tallest dagoba in Sri Lanka. During its glorious days, Abhayagiri Monastery was home to one of the finest libraries in the world. In memory of the Chinese Buddhist monk Fa-Hsien who studied the Buddhist manuscripts therein in the 5th Century CE, a new museum was established by the Chinese government so that the archaeological treasures discovered in the recent excavations could be deposited and displayed.

Aukana Buddha Statue in Asisa Mudra or the posture of blessing is carved out of a rock boulder. The statue is carved in the round connected to the back to the rock boulder. The delicate and skillful carving of the Buddhas robe humanizes and chastely reveals the underlying form of his body, while the faces impassive expression projects an aura of spiritual supremacy.

It is said that the degree of alignment of the statue is such that raindrop on the nose would drop straight down to small depression carved between the toes. Aukana Buddha Statue is a masterpiece of a colossal Buddha Statue by an unknown sculptor: the serene expression of the statue, the gracefully carved robe with neat pleats brings in delicateness that could hardly be moulded into a rock. The impassive expression of the face reflects the supreme spirituality.