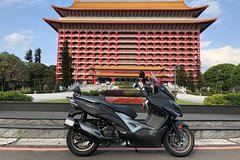 Do you want to have a stress free trip in Taipei? We can help you to make your dream trip come true; avoid the traffic and discover the most hidden gems of Taiwan with our moto-drivers!

Visit the most beautiful places on the Northern side of the island riding a motorcycle ( as a passenger ). Eat local food and enjoy one of the best food market in Taipei. Have Fun and enjoy your trip in Taiwan with your special licensed and experienced moto -drivers!

The Taipei Confucius Temple is modeled after the original Confucius Temple in Qufu, China. In keeping with the sober spirit of Confucianism, the building is multilateral austere. Visitors also won't find the spring couplets common at other types of temples.

Taipei Grand Hotel, a 14-story palace-like building, faces Keelung River, nestled against Yangming Mountain, overlooking Songshan in the east and Danshui in the west. Since 1952, the Grand Hotel has been standing midway up Yuanshan, a towering building with Red columns, gilded tiles and a magnificent, grandiose, regal, classic presence, a must-visit great gem of Chinese culture.

Built on a green hillside in 1969, the impressive National Martyrs' Shrine was architecturally inspired by the Hall of Supreme Harmony in Beijing's Forbidden City. The shrine is dedicated to the 390,000 soldiers killed in the service of their country during the War of Resistance against Japan And the civil war between the Chinese Republican and communist forces. A major attraction at the shrine is the hourly ceremony for the changing of the honor guard in the front of the main gate.

Yehliu is a cape on the north coast of Taiwan, about an hour driving from Taipei. It's known for Yehliu Geopark, a landscape of honeycomb and mushroom rocks eroded by the sea. The coastline is dotted with remarkable geological formations named after their shapes, The Queen's Head and Dragon's Head, because of their shapes resembling faces; ice cream cones and giant sandals.

Tucked away in a cove in New Taipei's Wanli District, Guihou Fishing Harbor is a cosy fishing village on Taiwan's northern coast. Many flock to the village's "Fishermen's Market" throughout the year to sample some of its must-try seafood. Customers can pick live Seafood from the many stalls in the wet market and then choose from the variety of kitchens at the market to have it cooked.

Ying yang Sea is a natural phenomenon formed from the running of yellowish iron-rich river runoff into the sea. As the river water and sea water don't mix that fast, it creates the pattern of the ying-yang.

Up stream from Yingyang Sea, is the Golden waterfall. It is so called due to the high iron content, making the rocks shine a bright yellowish brown.

During the Qing Dynasty, this isolated village housed only nine families; thus the village would request "nine portions" every time shipments arrived from town. "Jiu" means "nine", "Fen" means "portions". Until the 1950's, Jiufen Was a prosperous gold mining town but in the next years the town started to decline. This small village is located within hills, next to the mountains, and facing the ocean. Its special location saved it from becoming another anonymous mining ghost town. Jiufen is Now a popular tourist destination for Taipeites eager to relive scenes from the past.

The epitome of a traditional Taiwanese night market, this 600 metre path along Raohe Street in Songshan District is packed with fun and interesting night foods and snacks, Quaint shops and stalls, and carnival games with prizes.