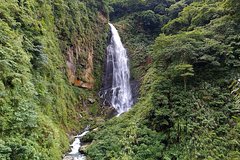 Let your guide take you to the higher-altitude peaceful areas of Taiwan! Visit, among other things, Guanyin Waterfalls, The Old England Maron and the Mona Rudo Memorial Park.

Guanyin Waterfall is a must-see for those who are traveling to Cingjing Farm from downtown Taichung as it is easily accessible. You will first encounter the outer waterfall merely five minutes after passing the entrance. Visitors are often spotted playing or meditating under the inner waterfall. The walking trail built along the stream is alive with an abundance of butterflies in a tranquil, heaven-like setting. Guanyin Waterfall has a total drop of around sixty meters in height, and the 1.1-kilometer-long trail consists of stone-paved paths and boardwalks. It will be a leisurely stroll for everyone regardless of age. A wealth of butterfly-friendly plants along the trail is the reason why an incredible variety of butterflies are celebrated here in all of their beauty and wonder. The waterfall is a popular destination for those who are looking for a quick dip in the water to keep themselves cool and active all day long under the Taiwanese sun.

Old England, located on the road up to Cingjing Farm, is one of the most luxurious (and expensive!) Bed & Breakfasts in Taiwan. True to its name, Old England is a traditional English mansion, featuring all things Britain. White marble, a large clock on the main tower and detailed sculptures on the walls have tourists happily snapping away on their cameras. The sculptures, lanterns and furniture, all carefully imported from England itself, give this place an authenticity of a Tudor-style mansion. Step inside the dining room and be transported to another place of another era. English afternoon tea comes with a dainty three-tier stand full of western style cakes and nibbles. A stroll around the garden will make you feel like you have entered something of a Disney scene. The owner is famous for having spent hundreds of millions of Taiwanese dollars building this place. And the result pays off. How do we know? This is one of the most famous places for couples to come for pre-wedding photo shoots. Make a visit yourself, and youll see why.

Hakone is a famous hot spring resort in the mountains of Japan, and the owner of Hakoune Onsen in Nantou would like to invite visitors to soak up the unique Japanese culture of onsen in a true Japanese setting before they hit Wushe and Cingjing. Hakoune Onsen offers temporary access to spa facilities with an entrance fee, allowing visitors to wash away all their fatigue. While soaking in the hot spring, you will be surrounded by the misty mountains of central Taiwan as if you were in a complete wild place. When the leaves start to fall and that winter wind starts to set in, you know it is the best time of the year to get into the hot spring again. After a hot soak, make your way to downtown Puli, where you could grab some snacks and a beer or two for the night. Enjoy the sublime moments under the starry sky with friends and loved ones.

Whether you are on your way to Hehuanshan or heading back to Sun Moon Lake, Mist Plaza will make a perfect stopover, where there is a balanced mix of shops, restaurants and cafes. During the day, you will find a myriad of restaurants serving food freshly prepared on the spot such as Urn Chicken (a whole chicken roasted in a barrel) and Yunnan cuisine. The Starbucks store here sits at 1743.5 meters, making it the highest-elevation location of the chain in Taiwan. At Mist Plaza, most shops are closed for the night, but the almighty 7-11 is open 24/7 and ready to warm your stomach at all times. After filling your tummy nice and full, take a look at the souvenir shops, where you would find handicrafts carefully made by local aborigines. If you have some more time to spare, have a stroll around the garden near the parking lot. When the weather is fair, the fantastic views allow you to admire the rolling hills and rugged mountains against the clear blue sky. Even on rainy days, the clouds hovering over the peaks in the drizzling rain will also give a romantic touch to the experience.

Wushe Incident began in 1930 and was the last major uprising against Japanese imperial control. After this indigenous insurrection, rebellions stopped using violence as a political means and instead turned to social movements. The uprising took place in the Renai Township of Nantou. In response to long-term oppression by the colonial Japanese forces , the Seediq (賽德克) indigenous group attacked their village, killing over 130 Japanese people. The Japanese colonizers then led a relentless counter-attack, killing more than 1,000 Seediq aborigines with bombs, cannons and toxic gas. The leader of Seediq warriors, Mona Rudao (莫那魯道), ended up committing suicide by shooting himself with a pistol to keep the armed forces from capturing him alive. Hundreds of his people also hung themselves to death. The colonial government was under fire after the Wushe Incident, and criticism was voiced both from within Japan and abroad for their inhumane way of suppressing the rebels, leading to many changes in aboriginal policy. In memory of the braveness of Seediq aborigines and the contribution of their greatest leader, the government set up a monument within Wushe Incident Memorial Park. In 2011, the historical epic film Warriors of the Rainbow: Seediq Bale (賽德克．巴萊)  a panegyric to the Wushe Uprising  hit the theaters, paying tribute and bring attention to this vanishing piece of history.

Huang Fang-liang (黃芳亮) is a Taiwanese paper artist who not only explores possibilities of paper, but also creates more than fifty different products only with paper, whose creative paper company Carton King even holds over 100 patents. Carton King has a few locations in Taiwan, but the one located in the Beitun District of Taichung is the largest. Carton King is a perfect result out of the sheer popularity of these paper-made products, where snacks, hot pots, afternoon tea and set menus are served. Almost everything seen in this restaurant, from dining room sets to lampshades and pots, is made with corrugated paper  Carton King is no doubt a mind-blowing wonderland of fantasy and imagination. You will find paper-made hats and handbags in the souvenir shop as well as all kinds of creative paper artworks on display in the exhibition hall (these are things you have to see for yourself to believe). The creativity is mind-blowing, but the food is nothing special. We suggest you save your stomach for the authentic Yunnan cuisine served up around Cingjing Farm.

Your guide will only bring you to the Carton King shop.