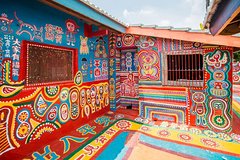 Go away from the busy City of Taipei and visit the northern part of the Country. Explore Keelung City and the park where you can have a commanding view of the city. You cant miss a 80 foot tall Buddha Statue message of compassion and peace and the Goddess of Mercy. You will also have an experience in being surrounded by different rock formations at Yeliou Geopark. After that, you will head to Taichung to explore the beauty of Taichung City.

Queen's Head Rock
Queen's Head is a landmark mushroom rock formation at Yehliu Geopark. Between 1962 and 1963, the top concretion split to give the stone its current graceful form. Seen from a distance, the rock resembles a bust of Queen Elizabeth with a long slender neck and beautiful facial lines, hence the name. The neck of the rock has thinned with natural weathering over the decades. Plans are now underway to reinforce the rock to ensure it survives as a landmark for years to come.
Duration: 8 hours

Miyahara
Situated nearby Taichung Train Station on the bank of Luchuan, Miyahara is a red-brick architecture built by Miyahara Takeo, a Japanese ophthalmology doctor in 1927. It was the largest ophthalmology clinic in Taichung during the Japanese colonial period. After the surrender of Japan in 1945, Miyahara became Taichung Health Bureau. As time passed by, the suspended Health Bureau slowly decayed and became an unused dangerous building. Fortunately, Dawn Cake, a pastry company renowned for its pineapple cakes, acquired the building and preserved Miyahara's original red-brick walls and archway. The interior decor was redesigned like Hogwarts in the movie Harry Potter. The water well in the middle of the building is redecorated into a modern-looking fundraising box made of glass.
Visitors to Miyahara are not only recommended to appreciate the details of the historic architecture but also try Dawn Cakes signature ice cream, bubble tea and pastries wrapped in nostalgic packings!

Gaomei Wetland
Gaomei Wetland located on the south of the mouth of Dajia River is a land mixed with both sand and soil textures and comes in 1,500 acres. That explains why it has complicated yet rich wetland ecology and possesses the largest group of Bolboschoenus planieulmis in Taiwan. Due to diverse geographical features, the species of its ecology is quite abundant. Every year around fall and winter, large flocks of migrating birds would come here for either short or long stay over the winter, serving as the best spot for bird-watching.
Duration: 8 hours