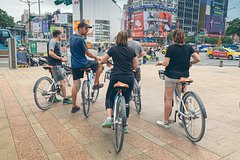 Experience Taipei the way the locals do, by bike. We start the day with a traditional Taiwanese breakfast, and then pedal around historic streets, traditional markets, grand architecture, immaculate temples, and more! Listen to fun facts from your guide about the culture and history of the city as you go. This tour is a great way to orient yourself on your first day in the city, or see the sights if you only have a short time to visit.

A traditional street market where locals come to buy produce, meats, clothes, and other necessities.

Learn a little about the founding father of Taiwan at this beautifully restored Japanese park.

A grandiose memorial dedicated to the former leader of Taiwan and the Chinese Nationalist Party. Stay and watch the changing of the guards!

Built by the colonial Japanese, this building now serves as the office of Taiwan's leader

The famous pedestrian walking area. This place is populated by many young shoppers. It has quite the night life and resembles "Times Square" or "Shibuya".

At it's peak in the late 1800's, this area was the busiest commercial area in Taipei. Now, the Taipei Government has worked to preserve and restore this area to its former glory. This a great spot for photos!

Used primarily as a ferry port now, this used to be the main shipping port of Taipei. Here you can see the view of New Taipei City across the river as well as the Yangming mountain range in the distance.

The most famous, and arguably the most alluring, temple in Taipei

A festive temple often visited by those seeking to improve their love life. Delicious free tea is generously offered here