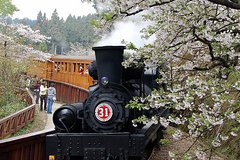 You will be met at the airport by our driver to begin your journey.

With our expert tour guides, you will have the best possible experience as you tour this beautiful island, rich in both culture and tradition. We will take you to the beaten track and into the lives of the people of Taiwan in this 9 days tour.

Miyahara Ophthalmology
Miyahara is a red-brick architecture built by Miyahara Takeo, a Japanese ophthalmology doctor in 1927. It was the largest ophthalmology clinic in Taichung during the Japanese colonial period.
Duration: 8 hours

Lukang Historic Area
The historic site is perhaps the only place in Taiwan which best preserves the architecture stemming from as early as the Qing Dynasty.Today, these traditional architectural pieces with brick walls, tiled roof as well as wooden door and windows are listed as a historic site. In addition to the main street, the winding brick streets and the narrow Osmanthus Lane are another area which had been filled with shops and households since early times.
Duration: 8 hours

Alishan National Scenic Area
Alishan is blessed with bountiful natural resources, such as sun rise views, a sea of clouds and old forests. Especially as a popular folk song goes, Alishan has amazed people with its lush green mountains and deep blue waters. No matter in spring, summer, autumn or winter, visitors can expect to appreciate some of its beauty. For years, Alishan has been famous for its historical forest railway and indigenous tribes, too.
Duration: 8 hours

Kenting National Park
With elegant coastlines and soft, clean beaches, Kenting is a favorite place for shooting idol dramas and music videos. The rich ecological resources along the rocky beach further make it a paradise for snorkeling. You will marvel at the splendid display of reefs and creatures on the seabed.
Duration: 8 hours

Spring & Autumn Pavilions
At the southwest of Lotus Pond, the two Chinese palace style pavilions are called Spring and Autumn, to commemorate GuanGon (a saint of military). The two pavilions are connected by a curve bridge; the curve bridge is a great spot to have the lotus view in summer time. You can access the pavilion by the dragon-like entrance which with beautiful colored wall paintings, and there are statues of god for visitors to worship.
Duration: 8 hours