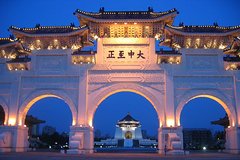 Spend a morning or afternoon exploring Taipeis urban and historic highlights on this half-day sightseeing tour. Gain a deeper insight into Taiwanese religion, history, and culture with stops at five famous sightseeing spots.

- Discover more about Taiwanese history from your informative guide

This renaissance-style building has been the highest seat of government in Taiwan for over a century, first as the office of the governor general's office during the Japanese colonial period, and after 1949 as Taiwan's "White House."

Chiang Kai-Shek Memorial is an impressive monument to a great Chinese leader. The majestic hall towers over 25 hectares of landscaped gardens, graceful pavilions, and ponds. A statue of late President Chiang looks out over the city from the main building.

An elegant Ming-style arch at the main entrance is flanked by two classical-style buildings, the National Theater and the National Concert Hall. The square between the two buildings is a popular gathering place during festive occasions.

Built to be in memory of the heroes who sacrificed their lives during the revolutions led by our National Father, Dr. Sun Yat-Sen. There will be hourly change ceremony of Honor Guards for you to see the parade and salutations toward the wooden seats resembling the spirits of our national heroes. The change ceremony of Honor Guards always attracts a lot of visitors and tourists.

The National Palace Museum houses the world's largest collection of priceless Chinese art treasures, one which spans China's nearly 5,000-year history. Most of the museum's over 600,000 art objects were part of the Chinese imperial collection, which began over 1,000 years ago in the early Song dynasty.

The Grand Hotel is a landmark on hill overlooking Taipei basin. The main building of the hotel is one of the world's tallest Chinese classical buildings. It was also the tallest building in Taiwan from 1973 to 1981.

Xingtian Temple is a popular temple in Zhongshan District, Taipei, Taiwan. This temple is devoted to Guan Yu, the patron god of businessmen, and is relatively recent in origin. This temple is situated on a street corner near the center of the city. Sculptures of dragons feature prominently in this temple's design