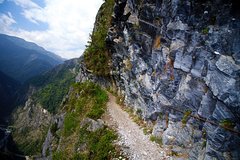 This all-inclusive tour covers your entrance fees into Zhuilu Old Trail, lunch, and two-way shuttle from your B&B in Hualien City. All you need to do is hop on to enjoy a hassle free day exploring the iconic trail of Taiwan!

Arguable the most iconic day hike in Taiwan, Zhuilu Old Trail allows you to experience the magnificence of Taroko National Park through bird's-eye views of Taroko Gorge. Ascend through the sub-tropical forests of Taroko, and be rewarded with stunning views of the marble canyon as you thread on a narrow path along the cliffs edge.

Arguably the most iconic day hike in Taiwan, Zhuilu Old Trail allows you to experience the magnificence of Taroko National Park through a bird's-eye views of Taroko Gorge.

Zhuilu Old Trail was originally carved out by aboriginals as part of mountain path to cross between the eastern and western settlement of Taiwan. With the building of the cross-island highway, Zhuilu Old Trail has since been announced as a conservation area and requires special permits for entry.

The first section of the hike consists of a continuous ascent up a rocky path in a sub-tropical forest before arriving at the Badagong outpost: a abandoned settlement once occupied by the Japanese troops. The next stretch continues as a upward climb with another scenic rest stop at a suspension bridge overlooking the Liwu river. Upon reaching the highest point, be rewarded with the stunning views of Taroko Gorge as you thread along the narrow path carved out of a cliff overlooking Taroko Gorge. Following that, we will rest and have lunch before turning around to make a descent via the same trail.