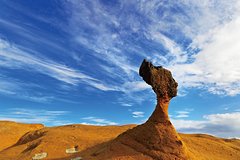 A geologists dream tour, explore the harbor city of Keelung on this four-hour tour from Taipei. A 40-minute drive northeast of Taipei, Keelung is one of Taiwan's international seaports. Travel to the Northern Coast of Taiwan to the fascinating natural rock formations of Yehliu Park, where you will discover the infamous rock formations of the Queen's Head and Fairy's Shoe, a fascinating place for a day trip.

Located at the northern tip of Taiwan Island between Fugui Cape and Cape Bitou, the harbor is embraced by mountains to its east, west, and south with a narrow waterway approximately 2,000 meters in length and 400 meters in width that extend from the inner harbor in the southwest to the harbor mouth in the northwest. Featuring both military and commercial applications, Keelung Harbor serves as an excellent harbor in Northern Taiwan.

Built along the mountain and close to the harbor, Zhong Zheng Park is the most famous attraction in Keelung. The giant white statue of Kuang-Yin Buddha at the top of mountain has become the guiding sign for those incoming ships, while the always-smiling Miler-Fo Buddha welcomes the visitors and tourists. There are lots of facilities here providing people with a place to spend their leisure time.

Yehliu Geological Park is famous for its sea-eroded landscape, while most of the spots are very close to the sea. The park can be divided into three areas. The first area contains mushroom rock and ginger rock; the second area is similar to the first area, where the mushroom rock and the ginger rock are the main focuses, only they are fewer in numbers. You may see the Queens Head, Dragons Head Rock, and etc. The third area is the wave-cut platform located on the other side of Yehliu, which also includes the major ecology reserve of Yehliu Geopark in addition to the said rock landscapes.

The best known spot in Yehliu Geopark, is a mushroom rock named for resemblance to the profile of Queen Elizabeth I of England.

However, after 4,000 year of natural erosion by the sea water and wind, the Queens Head is at risk of being snapped. Scientists are battling to save the ancient rock from erosion and to preserve its elegant shape.