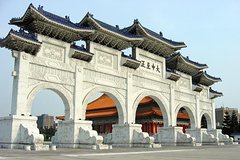 • Full-day private sightseeing tour of Taipei with a private driver

• Experience the captivating sight of Taipei 101, one of the worlds tallest towers

The Lungshan/Longshan Temple is a favourite amongst tourists. The intricate architecture as well as the cultural significance of this temple attracts visitors and locals alike.

The Taipei 101 is one of Taiwan's most iconic buildings. It is one of the world's tallest skyscrapers. Going up to the observatory deck would give you a beautiful view of the city.

Martyrs' Shrine was built to honour the fallen Kuomintang soldiers after the Chinese Civil War, and is home to around 390,000 spirit tablets honouring the lives and sacrifices of the KMT soldiers during the war against the communists in mainland China.

National Palace Museum has a permanent collection for nearly 700,000 pieces of ancient Chinese imperial artifacts and artworks, the largest of its type in the world.