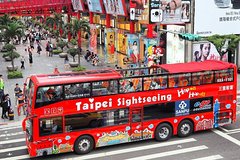 The newest addition to Taipei City's efficient transportation system, the double decker 'Hop-On, Hop-Off' bus gives visitors a hassle-free way to tour the city by usage of a day pass for both the Red and Blue lines.

• Discover major landmarks in Taipei by exploring from 23 bus stops across two routes.
• Visit top attractions such as Taipei 101, National Palace Museum, Chiang Kai Shek Memorial Hall, Ximending and many more.
• Hop on and off at your preferred attractions along the Taipei sightseeing bus route for maximum flexibility.
• Share your traveling moments with free WiFi available on the Taipei double-decker bus.
• Enjoy introductions of attractions with a headset commentary in a choice of languages: English, Chinese, Japanese, and Korean.
• Don't miss out on the famous Ay-Chung Rice Noodles, Braised Pork Rice Bowls, Spicy Hotpot, and more Taiwan goodies!

Completed in 1884 by the Qing Dynasty, this gate was previously the northern gate to Taipei City.
Traditional 2-story gatehouse built as part of the city's 19th-century fortifications.

Dongmen is a subdistrict within Luohu District of Shenzhen, in China. It is a shopping district located on Dongmen Pedestrian Street.

Located opposite Chiang Kai-shek Memorial Hall (中正紀念堂), Nanmen Market first established during the Japanese Colonial Era is one of the oldest traditional markets in Taipei City, and with its diverse variety of foods on offer, the market has now become very popular among locals. It is also a hot spot to purchase Chinese New Years fares.

Taipei 101 is an engineering marvel and the first building of its kind in the world. Spanning 101 stories above the ground at 508 metres, the building was designed as a symbol of technology's evolution fused with Asian tradition. The building features many pan-Chinese and Asian elements mixed with a postmodern style, and is designed to withstand typhoons and earthquakes common in Taiwan.

The hall contains displays of Sun's accomplishments from the revolution during and after the fall of the Qing Dynasty, and today is a meeting ground for various social, educational, and cultural activities.

Originally built as a winery, the complex has been transformed into a multipurpose park and creative space for Taipei's youthful art scene, and is home to multiple exhibitions and shows.

The largest electronics marketplace in Taiwan, Guanghua is arguably the centre of the booming Taiwanese technology and IT industries. In addition to the main, 6-story building housing everything from PC components to karaoke systems, the lanes and alleys directly south of the complex along Bade Rd are home to countless shops selling literally anything and everything tech.

Taiwanese cuisine's mecca and home to the original (and world-renowned) Din Tai Fung (鼎泰豐) restaurant (located along Xinyi Road), Yong Kang Street is a must visit destination for all travelers to Taipei City.

Housing restaurants and cafés that cater to all budgets, Yongkang Street and its neighboring lanes and alleys are home to more than 30 operations, not including night market carts and independent merchants that line the streets selling all types of food, including pan-Chinese cuisine, Korean, Japanese, Western, and unique fusion dishes unique to Yong Kang.

The Confucius Temple along with neighbouring Bao'an Temple (保安宮) are part of the Dalongdong Cultural and Historical District (大龍峒).

Originally constructed in 1742 as a wooden shrine, the Bao'an Temple is a Taiwanese folk religion temple. Throughout Taiwan's history, the temple was renovated and reconstructed numerous times, leading to a 2003 induction into UNESCO for cultural heritage conservation.

Officially the National Revolutionary Martyrs' Shrine, the shrine was built to honour the fallen Kuomintang soldiers after the Chinese Civil War (and subsequent government relocation to Taiwan), and is home to around 390,000 spirit tablets honouring the lives and sacrifices of the KMT soldiers during the war against the communists in mainland China.

Built in 1969, the complex contains the main shrine, as well as several small exhibitions along the perimeter.

The Shilin Night Market in Taipei is one of the largest, most popular night markets in Taiwan with regard to food, and also one of the most popular points of Taipei's night life among visitors. Located in Taipeis Shilin District, a mere 70 metres from MRT Jiantan Station between Dadong Rd, Danan Rd, Wenlin Rd, and Jihe Rd. The maze of alleyways is filled with a variety of local, traditional, and international merchandise that attract locals and foreigners alike.

The newest amusement park in Taipei City, the Taipei Children's Amusement Park is located nearby Shilin Night Market (士林夜市) and is great for a fun afternoon with family.

There are 13 carnival attractions in the park including a large ferris wheel, roller coaster, bumper cars, swinging ship, and monorail.

The upper levels of the museum are home to permanent exhibitions about life sciences such as biology, zoology, and biodiversity, as well as material sciences such as physics, chemistry, and mathematics.

The former residence of Chiang Kai-shek and his wife Soong Mei-ling, the Shilin Official Residence is a designated historical site open to the public as a museum celebrating their accomplishments as well as their contributions to the growth of Taiwan in the modern era.

Besides the main residence, other buildings within the compound include the guesthouse, Victory Chapel, Ciyun Pavilion, and numerous gardens open to the public.

Originally founded within the walls of the Beijing Forbidden City in 1925, the present-day National Palace Museum moved to Taipei's Shilin District following the Republic of China government relocation in 1949 with an official opening for the public in 1965. Over 600,000 of the most precious artefacts within the collection were moved to Taiwan to prevent their desecration during and after the Chinese Civil War. The museum is currently celebrating its 90TH Anniversary.

A fully modern museum, the Palace Museum also participates in Taiwan's National Digital Archives Program, using the latest in digital technology to digitally preserve its ancient artefacts as well as high technology to improve the museum experience for visitors.

The "Harajuku" of Taipei, this pedestrian shopping haven is one of the city's culture centres, hosting a massive variety of fashion clothing shops, eclectic restaurants, clubs, and bars.

Located within the Taipei Expo Park, the Taipei Fine Arts Museum is one of Taiwan's most prominent art museums and arguably the most popular art exhibition hall. Hosting a wide variety of international and Taiwanese art, the museum is located just north of the city center, and is very easily accessible.