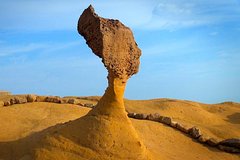 Venture to the very tip of northern Taiwan, an area embraced by mountains and the Pacific Ocean stretching to the northern horizon.

- Visit Keelung Harbor's magnificent ocean views and the modern architecture of the Service Building
- Explore Zhong zheng Park, climb up a 25m white Goddess of Mercy statue for great city views
- See the amazing geology of Yehliu Park's rock formations which drawing visitors from all over the world
- Comfortable bus tour with professional guide, including hotel pick up and drop off

Keelung City is a port city near Taipei, in northern Taiwan. Surrounded by mountains, its known for its sheltered harbor. Near the waterfront, street-food stalls at Miaokou Night Market offer traditional snacks and seafood. Several forts around the area include hilltop Ershawan Fort, with cannons and a Chinese-style gate. Both Gongzi Liao Fort and Dawulun Fort offer views over the harbor and ocean.

The Port of Keelung, also known as Keelung Harbor, is located in the vicinity of Keelung City, Taiwan. It is operated by Taiwan International Ports Corporation, Taiwan's state-owned port management company

Yehliu is a cape on the north coast of Taiwan. Its known for Yehliu Geopark, a landscape of honeycomb and mushroom rocks eroded by the sea. Well-known formations named for their shapes include the Queens Head and Dragons Head. The park is also home to birds such as ospreys and little egrets. In the village of Yehliu, the elaborate, 19th-century Baoan Temple was built using materials from an abandoned boat.