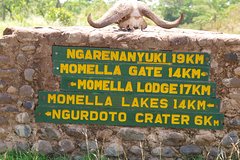 Serengeti Safari Booking does not skimp on what you came to see. Our company free pick-up and drop off from the Hotels/ Airports clients(s) confirmed a Safari with us. We also allocate good Hotels, Lodges for the travelers who didn't book. A joined Private Safari provides a luxurious adventure while exploring the African culture(Maasai and Barabaig) and wildlife in their habitats in a 2 by 2 seat 4WD Jeep everyone in a window seat. A day Trip Arusha National Park you will sight view big 5,. Other Wild life include Zebra, Warthogs,Giraffe Gazelles,many antelope species, number of birds and other many. Inside the Park youll game drives , walking safari, able to swim in the Meru water fall.

• 7.00 am Early breakfast in Arusha Tourist Inn.
• 8.30 am youll be picked up and start game drive at Arusha National park.
• Youll have not less than 6 hours game-drive(four wheel pop-up safari jeep) in Arusha National Park.
• Lunch at picnic site at 1.00 pm.
• 16.00 pm youll start exiting the Arusha National Park Gate heading to Arusha town.
The park main gate is 25km north east of Arusha city. It is also 58 km from Moshi Town,35 km from Kilimanjaro International airport (KIA) and 300km from Serengeti National Park. The park is small(542 sq kilometers) but varied with spectacular landscapes in three distinct areas. In the west, the Meru Crater funnels the Jekukumia River; the peak of Mount Meru lies on its rim. Ngurdoto Crater in the south-east is grassland The shallow alkaline Momella Lakes in the north-east have varying algael colours and are known for their wading birds.
The park is very small in size but rich in varieties of wildlife which provide a good game-sighting as in normal Parks in Northern circuit. Visitors will come across common animals include giraffe, Cape buffalo, zebra, warthog, the black-and-white Colubus monkey, the blue monkey, flamingo, elephant, lion.
Leopard populations are rarely seen in the Park. More than 400 species of birds are documented. Narina Trogon, Bar-tailed Trogon are highlights for birders. Inside the Park there are many forest species than elsewhere in the world.