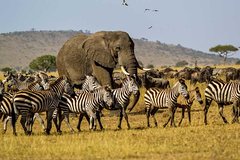 This park is often referred to as the home of elephants you have a great chance to spot elephants in large group gathering around the Tarangire river. Other animals to be spotted include leopards, lions, giraffes, and even tree climbing pathos.

After breakfast you met with our professional tour guide/driver, who will deliver a short safari info briefing, after which we travel east of Tarangire national park. The park runs along the line of the Tarangire River and is mainly made up of low-lying hills on the Great Rift Valley floor. Its natural vegetation mainly consists of Acacia woodland and giant African baobab trees, with huge swamp areas in the south. Both the river and the swamp act like a magnet for wild animals during Tanzania dry season. Tarangire national park is reputed to contain some of the largest elephants herds in Africa. We will enjoy a picnic lunch inside the park and do two exciting morning and afternoon game drives, along the Tarangire River. Late afternoon we depart to Moshi where we will end our safari adventure. You will be taken to your hotel or airport which ends our packages services.