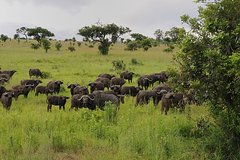 Saadani National Park Safari Saadani is where the beach meets the bush. The only wildlife sanctuary in East Africa to boast an Indian Ocean beach front, it possesses all the attributes that make Tanzanias tropical coastline and islands so popular with European sun-worshipers.

Stop At: Saadani National Park, Usambara Street/Independence Avenue, Pangani Tanzania
Depart 0900am from ZANZIBAR directly to Saadani arrival at 0915am upon arrival meet and greet then head to Wami River for a boat trip having a chance to see many wild animals along the river drinking water not forgetting giant crocodile and many birds spices. Lunch at the river or Saadani Village, afternoon game drive in the park also having a chance to see Elephants, Zebras, Giraffes, Waterbuck, Lions, Leopards, Hyenas and many more, dinner and overnight .
Duration: 10 hours

Stop At: Saadani National Park, Usambara Street/Independence Avenue, Pangani Tanzania
Early breakfast then game drive in the park sees the beauty of the park that hosts a large population of hippos, crocodiles, flamingoes, and many large bird species. Giraffe and wildebeest can be spotted and elephants have been seen playing on the beach, game drive till late in the afternoon then drive to airstrip for your flight at 1445pm arrival in Zanzibar at 1500pm transfer to your Hotel
Duration: 8 hours