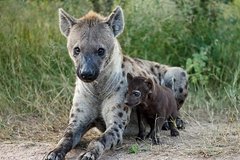 Join 2 days budget camping safari to Tarangire and Ngorongoro Crater. See all Africa big 5 animals in this tour. Get free airport pickup and drop off, Window seat, Pop up roof and accommodations before and after safari.

Stop At: Babati, tanzania, Tarangire National Park 3134 Tanzania
Breakfast at 7:30 am, You will be pick-up from 8:00 am, Departure at 8:30 am. Its 2 hours drive to Tarangire and you will have 6 hours game drive with pick-nick lunch inside the park. Later you will exit the park.

Stop At: Ngorongoro Crater, Ngorongoro Conservation Area Tanzania
Early in the morning after breakfast, At 8:00 am you will head to Ngorongoro crater floor. Its a 1 hour drive to the crater gate. You will have a 6 hour game drive in the park with pick nick lunch. Later you will exit the park.