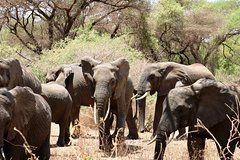 Visit one of Tanzania's wonders of nature the deep, volcanic Ngorongoro Crater Known as the world's largest unbroken caldera and Tarangire national park the home of big herd of Elephants more than 3000 Elepants live in this park and Ngorongoro is home to an incredible array of wildlife such as lion, elephant, wildebeest, hyenas,hippos Black rhinos and many others

After breakfast we pick you up from your lodge in Arusha and drive to Tarangire National Park. The drive is along Arusha town so any last minute purchase can be done on the way. Tarangire National Park is known for its large elephant population & giant baobab trees. 6000 elephants, 2,500 wildebeest & 3,000 zebra were recorded in this park.

This huge population of ungulates are moves around Tarangire Lake Manyara ecosystem. Tarangire River & Lake Burunge dam is the permanent source of water in the entire park serving the larger number of wildlife especially during the dry season. You may expect to spot lion, leopard hyena, jackals, cheetahs, buffalo, giraffe, wildebeest, Zebras & the three rare species of Great kudu, Oryx & the Ash stalling. Bird life is ubandant in this park over 400 bird species were recorded here which includes ostrich, herons, cori bastard, secretary birds & lots of aquatic birds. Parked lunch will be served inside the park.

Early breakfast then depart for Ngorongoro crater, descend over 600 meters into the crater floor for game driver. Ngorongoro crater is referred by many as an 8th wonders of the world. Supported by yearly around water supply from the highlands and fodders, the Crater supports a larger number of wildlife which includes herds of wildebeest, buffalo, eland, zebra, warthog, hippo, African elephant and the rare black rhino.

Another interesting part of this wildlife sanctuary is the dense population of predators like lion, cheetahs, hyenas, jackals & the ever mysterious leopard that needs well trained eye to spot. During the game drive you will visit Lake Magadi the alkaline lake located on the southwest corner attracts a good number of flamingos, some hippos and other aquatic birds. Late afternoon drive back to Arusha for dinner and Overnight or airport drop off. (Accommodation in Arusha can be arranged upon request at extra cost).