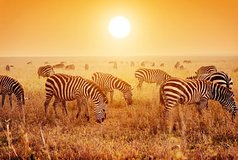 This special safari tour will give you a chance to explore the most three highlights in the Northern Tanzania circuit which is designed for those who are looking for a non-stop wildlife adventure. The safari will take you to Tarangire National Park; the home of elephants, cats and baobab trees, The Lake Manyara National Park; the paradise of birds and tree climbing lions and Ngorongoro Crater; the home of the endangered species of Black Rhino. Transfers to and from the airport are included

After breakfast, you will meet an office representative for briefing about your safari then depart to Tarangire National Park. The drive will take around two and a half hours. You will see firsthand all that Tarangire National Park is known for  the famous ancient baobab trees, tree climbing pythons, and the largest concentration of African elephants, lions, leopards, cheetah, giraffes, zebras, wildebeest, other antelopes species in rich numbers and birds. After a picnic lunch in midday, you will resume your afternoon game drive then drive to Karatu for overnight