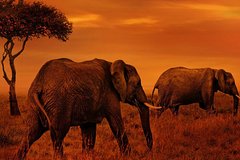 Stop At: Babati, tanzania, Tarangire National Park 3134 Tanzania
We will pick you up in the morning in Arusha and after a short safari briefing, you travel southwest towards the Tarangire National Park. The park has a diversity of landscapes including grass, acacia woodlands and forests and it is especially popular for its huge elephant herds and animals gathering at the river and swamps. Animals range from swarms of yellow breasted lovebirds to kudus, buffaloes, giraffes, zebras and impalas. Predators include lions, leopards and hyenas, while wild dogs are rare. In the late afternoon you will leave the park to travel to Fanaka Lodge, where you will spend the night. Dinner; Breakfast; Lunch http://fanakasafaricamps.co.tz/
Duration: 7 hours

Stop At: Lake Manyara National Park Tanzania
After breakfast, you will leave the area around Tarangire National Park and drive via the town of Mto wa Mbu to the Lake Manyara National Park. This park with its shallow alkaline lake stretches along the base of the Rift Valley Escarpment. Lake Manyara attracts thousands of birds, including huge flocks of flamingos. Other animals in the park include buffaloes, elephants, hippos and Masai giraffes as well as troops of boisterous baboons and monkeys in the forests. The park once became famous for tree climbing lions and if you are lucky to spot them you will be amused by the site of these animals lounging on branches in the acacia trees. After a game drive in the park you will ascend to Fanaka Lodge for Fanaka Lodge. Dinner, breakfast, lunch
Duration: 7 hours

Stop At: Ngorongoro Crater, Ngorongoro Conservation Area Tanzania
Rise and shine! After an early breakfast at your campsite, you will travel down a precipitous trail into the Ngorongoro crater. Its grass plains and acacia forests are home to almost all the species of animals found in the East African savannah. In only a few hours you might see all of the Big Five  lion, elephant, buffalo, rhino and leopard. After an extensive game drive and a picnic lunch inside the crater, you will leave the Ngorongoro Conservation Area and travel to Fanaka Lodge, where you will spend the night. Dinner; Breakfast; Lunch
Duration: 6 hours

Stop At: Arusha Village Experience, Arusha Tanzania
After a leisurely breakfast, you will start your journey back to Arusha, where you will arrive around midday. You will be dropped off at a hotel of your choice or at the airport. Breakfast; Lunch
Duration: 5 hours

No meals included on this day.
Accommodation included: Fanaka lodge