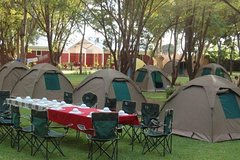 You will enjoy and experience nature, wildlife, habit and habitat of the fauna and flora in the natural areas, also peoples and culture

Day 1: Arusha  Manyara National Park
In the morning at 0830hrs after breakfast, depart for Lake Manyara National Park for lunch at lodge, and after noon game drives in the park. OR depart Arusha with picnic lunch for morning and afternoon gave drives in the park. The park is home to Lion, Hippo, Elephant, Zebra, Buffalo, Giraffe, Baboon, Blue and Vervet monkey, Warthog and moreAbout 350 species of birds have been recorded, at 1800hrs drive to Twiga camping Site for dinner and overnight booked on full board basis, FB

Continue with an afternoon game drive towards central Serengeti. The Serengeti is probably the most famous wildlife sanctuary in the world. Within its 15,000 sq km area it hosts 3 million large mammals. More than 35 species of plain animals- zebra, wildebeest, eland, giraffe, and others are found here. And so for the big five: elephant, lion, buffalo, leopard and rhino. The park is the staging zone for one the most spectacular events in the natural world- the annual migration of wildebeest. This commences around June when over 1 million wildebeest, zebra and gazelle head for the Maasai Mara in Kenya in search of pasture. They are followed closely by the predators of the savanna- lion, cheetah, wild dog, jackal, hyena and vultures. The Serengeti also has over 500 species of birds. Dinner and overnight at Seronera Camping site, full board.

Day 4: Ngorongoro Crater tour - Arusha:
Wake up early morning for breakfast then at 0600hrs descend into the Crater floor for game drives. All the BIG FIVE Rhino Lion, Leopard, Buffalo and Elephant live in this wonderful caldera, others are Zebra, Hippo, Wildebeest, Hyena and more Birds includes flamingos on the Soda Lake, Geese, Storks, Vultures and more At 1150hrs break for picnic lunch, which will be served at the picnic site in the Crater, Ngoitoktok swamp, a Hippo pool. At 1300hrs, ascend the Crater and drive on back to Arusha, End of Services