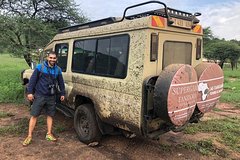 This safari package will give you an exciting opportunity to visit the most beautiful parks in the northern Tanzania. This includes visiting the endless plains of Serengeti National Park where you will be able to see all the big five. You will also visit Tarangire National park which is famous for a huge population of elephants and also the Ngorongoro Crater which is locally known as the garden of animals where there is a big chance to spot the big five in one day. This is a group safari and provides you with an opportunity to interact with people from different parts of the world.

Pass By: Ngorongoro Crater, Ngorongoro Conservation Area Tanzania
After breakfast, descend into the crater, enjoy 5 hours game drive in the crater. The Ngorongoro Crater is one of the most densely crowded African wildlife areas in the world and is home to an estimated 30,000 animals including some of Tanzanias last remaining black rhino.

Supported by a year round water supply and fodder, the crater supports a vast variety of animals, which include herds of wildebeest, zebra, buffalo, eland, warthog, hippo, and giant African elephants. Another big draw card to this picturesque national park is its huge population of predators, which include lions, hyenas, jackals, cheetahs and the ever-elusive leopard. We will enjoy a picnic lunch on the crater floor.