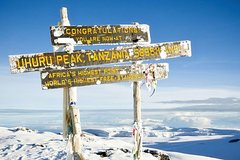 The Rongai route is the only route that approaches Kilimanjaro from the north, close to the Kenyan border. Though gaining popularity amongst climbers, this route still experiences low crowds. Rongai has a more gradual slope than the mountains other routes. It is the preferred route for those looking for an alternative to the popular Marangu route, for those who would like a more remote hike, and for those who are climbing during the rainy season.

This morning we will drive to the village of Nale Moru for the starting point of the Rongai route. The first stage of the trek is through farmland and pine forests. You may have chance to see the beautiful Colobus monkeys or if youre lucky enough, elephants or buffalos en route.

The morning hike is a steady ascent up to the Second Cave Camp located in the moorland zone with superb views of Kibo and the Eastern ice fields on the crater rim.

Leaving the pine forest behind we carry on with a steady ascent walking though moorland. There are superb views of the Eastern ice fields on the crater rim of Kibo, the highest of the three volcanoes which form the mountain. We will leave the main trail and strike out across moorland on a smaller path towards the jagged peaks of Mawenzi, the second of Kilimanjaro's volcanoes.

This morning we have a short but steep ascent up grassy slopes which is rewarded by a superb view of the Kenyan plains to the north. We leave vegetation behind shortly before reaching our next camp at Mawenzi Tarn Hut directly below the towering cliffs of Mawenzi. This afternoon you have chance to rest or explore the surrounding area to aid acclimatization

We leave our campsite and cross the lunar desert of the saddle between Mawenzi and Kibo After a couple hours trekking, reach this spectacular place, with the summit of Kilimanjaro in the background and our trail to the high camp stretched out before our eyes.

Today is The Big Day - the summit stage. You will begin your final ascent around midnight which will be long and strenuous. Passing the Hans Meyer Cave at 5220m, the climb slowly but surely goes upwards. At sunrise, you will reach Gillmans Point (5681m) the crater rim of Kilimanjaro where the sun will slowly start to warm up the land. You will have soon forgotten the cold of the night and after a further hike of 1 - 2 hours, you will reach Uhuru Peak at 5895m. On your return to Kibo Hut, a warm meal awaits you followed by a 1 - 2 hour break before proceeding back down to Horombo Hut.

The last stage passes through the heath and moor zone to the Mandara Hut (2700m) where a warm lunch is waiting for you. Soon, you will once again pass the tropical rainforest and after a total time of 6 hours trekking, you will be back at the Kilimanjaro National Park Gate (1860m).