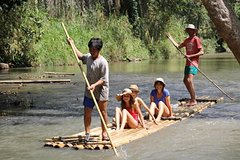 This is a perfect trip for soft adventure lover. Take a special time to train riding through death railway. Continue an Bamboo Rafting back to the camp and visit historical sites in Kanchanaburi.

TOUR DETAIL
06.00 Pick Up from Hotel Depart for KanchanaBuri
09.10 The War Cemetery of The Allied Prisoners of World war II
10.00 Visit Jeath War Museum
10.40 Walk along the Bridge Over the River Kwai
11.30 Excitement on Train riding through death railway and bamboo rafting
13.45 Lunch will be provided at Restaurant
15.00 Depart from The Restaurant to Bangkok
17.00 hrs. arrive to Bangkok

The Kanchanaburi War Cemetery (known locally as the Don-Rak War Cemetery) is the main prisoner of war (POW) cemetery for victims of Japanese imprisonment while building the Burma Railway. It is on the main road, Saeng Chuto Road, through the town of Kanchanaburi, Thailand, adjacent to an older Chinese cemetery.

The cemetery was designed by Colin St Clair Oakes and is maintained by the Commonwealth War Graves Commission. There are 6,982 POWs buried there, mostly Australian, British, and Dutch. It contains the remains of prisoners buried beside the south section of the railway from Bangkok to Nieke, excepting those identified as Americans, whose remains were repatriated.

There are 1,896 Dutch war graves, the rest being from Britain and the Commonwealth. Two graves contain the ashes of 300 men who were cremated. The Kanchanaburi Memorial gives the names of 11 from India who are buried in Muslim cemeteries.

Nearby, across a side road, is the ThailandBurma Railway Centre about the railway and the prisoners who built it. There is also a Dutch Roman Catholic church nearby  Beata Mundi Regina.

The museum was founded in 1977 by the chief abbot of Wat Chaichumpol Venerable Phra Theppanyasuthee. It is located on the grounds of a temple at the junction of the Khwae Yai and Khwae Noi rivers in Kanchanaburi and it is a part of the famous The Bridge over the River Kwai saga.
The acronym JEATH stands for the primary nationalities involved in the construction of the railway: Japanese, English, Australian, American, Thai and Holland, whereas the Thai name is Phíphítháphan Songkhram Wát Tâi (Wat Tai War Museum).
The museum is divided into two sections, one depicting the construction of the Death Railway which is meant to recreate the quarters used by Allied POWs, and the other consisting of reconstructed bamboo huts containing such items as paintings, drawings and photos of and by former prisoners, weapons, tools, and maps.
Tourist photos are not permitted in Section I of the museum.

The Bridge on the River Kwai is a 1957 epic war film directed by David Lean and based on the 1952 novel of the same name written by Pierre Boulle. The film uses the historical setting of the construction of the Burma Railway in 19421943. The cast included William Holden, Jack Hawkins, Alec Guinness, and Sessue Hayakawa.
It was initially scripted by screenwriter Carl Foreman, who was later replaced by Michael Wilson. Both writers had to work in secret, as they were on the Hollywood blacklist and had fled to the UK in order to continue working. As a result, Boulle, who did not speak English, was credited and received the Academy Award for Best Adapted Screenplay; many years later, Foreman and Wilson posthumously received the Academy Award.
The film was widely praised, winning seven Academy Awards (including Best Picture) at the 30th Academy Awards. In 1997, the film was deemed "culturally, historically, or aesthetically significant" and selected for preservation in the National Film Registry by the United States Library of Congress. It has been included on the American Film Institute's list of best American films ever made. In 1999, the British Film Institute voted The Bridge on the River Kwai the 11th greatest British film of the 20th century.

The Thailand-Burma Railway Centre is a museum and research center in Kanchanaburi, Thailand. It is privately funded and is run by Rod Beattie, an Australian who is an expert in the history of the ThailandBurma Railway.

Kanchanaburi,Thailand.Kiiti Raft is waiting to welcome you in a nature and relaxing setting. Here you will touch of more experience comfortable atmosphere along river Kwai Noi, with surrounded by the beauty of nature that warmly cuddle you. Kiiti Raft  you will find simplicity privacy and happiness on your holiday relax at Kiiti Raft , where nature surrounds you and is in touching distant.