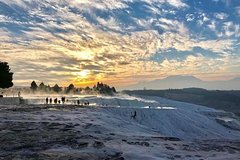 Turkey is a treasure chest. Participating this tour is like being like a kid in a candy shop. During this trip, you will reward yourself for being in such an amazing atmosphere. From the first day where you will be greeted at Denizli airport by the driver and then transferred to Pamukkale (approximately 50 minutes drive away) where you will meet the rest of your group and your tour guide and start your tour.

Stop At: Pamukkale Thermal Pools, Pamukkale Turkey
After early picking up from the airport, we have a 45 min drive to Pamukkale. A day trip to Pamukkale is the perfect option to save time and money while travelling between several cities. The unique calcium terrace and pools with hot spring water will amaze you during the tour on the endless white path. The tour covers Hierapolis Ancient Ruins City, Necropolis, Ancient Theatre, Thermal Pools, White Terraces, Travertine Pools, Byzantine Walls, Latrine, Tumulus Tombs, House of the Lonic Capitals, Martyrium of St. Philip, Karahayıt Red Spring Water Terraces. After the tour we go to our hotel for check-in and overnight stay in Karahayit.
Duration: 8 hours

Meals included:
• Lunch
• Dinner
No accommodation included on this day.

Stop At: Kaklik Cave, Honaz Ilcesi Kaklik Kasabasi, Pamukkale Turkey
After breakfast we leave for a wonderful day and Travel Direction Ephesus, but underway we will make several stops. First stop is referred as the Underground Pamukkale, Kaklik Cave is a lesser known destination that boasts the same travertine structures as its more famous neighbor, except theyre smaller and found inside a cave. Located around 45 km from Pamukkale, the cave was discovered after the collapse of its roof and has only been open to the public since 2002.
Duration: 1 hour

Stop At: Salda Golu, Yesilova 5km. Kayadibi mah. 1.küme evler mevki No.:27/1, Burdur 15500 Turkey
Second place we will take a swim in the Salda Lake.Lake Salda is one of Turkey's deepest, clearest and cleanest tectonic lakes. A place where everyone with a turquoise passion must fall down. The waters of Salda, a crater lake, start at the glass goblet and play with the indigo blue in the deepest places. A shattered crater lake. And there's something mysterious about it. The blueprints are also deep because the vegetation is formed by a volcanic eruption, which itself is the deepest lakes of Turkey with a depth of 184 meters.
The mystery of Salda does not end in the deep waters; The raft is carrying Mars features. The tsar has a white-like shores. It is thought that the red planet resembled Salda a million years ago because of the stromatolic rocks in the science. As you know, there are marks on Mars that point to the rivers and lakes in their time.

Stop At: Aphrodisias, 80 km from Pamukkale, Geyre Turkey
After a quick lunch we are visiting Aphrodisias. Aphrodisias is located in southwestern Turkey, in the fertile valley formed by the Morsynus River, in the ancient region of Caria. The serial property consists of two components. The first component encompasses the archaeological site of Aphrodisias following the city walls that encircle the city; and the second component includes the marble quarries located northeast of the city. Aphrodisias was founded as a city-state in the early 2nd century BC. An orthogonal street grid defines the pattern of the city; only a few structures, such as the temple of the goddess Aphrodite, are not aligned with the grid. Because the city shared a close interest in the goddess Aphrodite with Sulla, Julius Caesar and the emperor Augustus, Aphrodisias came to have a close relationship with Rome. It obtained a privileged tax-free political status of the Roman senate, and developed a strong artistic, sculptural tradition during the Imperial Period. Many elaborately decorated structures were erected during the period of Roman rule, all made from the local marble. After the tour we are driving direction our Hotel in Selçuk for the overnight stay.
Duration: 3 hours

Stop At: Ephesus Museum, Selcuk Turkey
Our day trip to Ephesus starts after breakfast with a pick up for the daily guided Ephesus Tour.
A visit to Efes once the commercial center of the ancient world, is a highlight of any visit to Turkey scheduled any time.
The city, whose wealth and patronage supported her splendid architectural program, was dedicated to the goddess Artemis. Her enormous temple, once considered one of the Seven wonders of the Ancient World and rebuilt several times, in its latest form of Ephesus dates from the third century BC. The ruins of Ephesus also include a theater, gymnasium, Agora and baths, as well as the library of Celsus.
After the Efes Tour we will drive direction Izmir Airport for the final stop.