Abu Dhabi through the eyes of an Emirati Guide 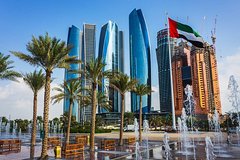 Abu Dhabi through the eyes of an Emirati Guide

Discover Abu Dhabi by visiting the main attractions. It is about the places and its story from the eyes of local Emirati guide. I share with you the stories about culture, heritage, and modern life style. Among the places we visit today are the following: Sheikh Zayed mosque, Maqta Fort area, Bateen neighborhood, Zayed culture center, Emirates Palace, Marina area, Date market and Eastern Mangroves. During the tour you will also have the chance to taste local food at a typical restaurant. Every tour is unique and customized to the guest interest and needs.

The unique cultural attraction celebrates the life, legacy, and values of Sheikh Zayed and offers a unique opportunity to immerse in the history and culture of the UAE. The visitor experiences within the Sheikh Zayed Memorial are designed to reveal aspects of the countrys broader social, cultural and environmental heritage, including art, stories, and exhibitions. Spread over 3.3 hectares of beautifully landscaped public space with indigenous flora, the memorial features a Sanctuary Garden including seating areas and a traditional falaj water channel, a Heritage Garden rich with medicinal desert plants, and an elevated walkway offering captivating views of The Constellation, the Arabian Gulf, and the citys dazzling skyline.

The centerpiece of the retrospective is The Constellation, a monumental three-dimensional portrait of Sheikh Zayed designed by public artist Ralph Helmick that features 1,327 geometric shapes suspended on more than 1,000 cables. The installation can be experienced differently from multiple vantage points and at night, the shapes shine like stars, evoking the timelessness of the founders vision as a guiding light. Set in a 30m-high Pavilion, the artwork is one of the largest art installations of its kind, and unique in its use of abstract portraiture on this scale

The Sheikh Zayed Grand Mosque stands out as one of the worlds largest mosques, and the only one that captures unique interactions between Islam and world cultures. Sheikh Zayed's vision for the Grand Mosque was to incorporate architectural styles from different Muslim civilizations and celebrate cultural diversity by creating a haven that is truly diverse and inspirational in its foundation. The mosques architects were British, Italian and Emirati, and design inspiration was borrowed parts of Turkey, Morocco, Pakistan, and Egypt among other Islamic countries, revealing a glistening architectural marvel with an astonishing capacity of 40,000 worshippers and visitors.

The name Wahat Al Karama literally translates to oasis of dignity. The site is a permanent tribute and war memorial to honor UAEs martyred soldiers and other Emiratis who sacrificed their lives for the service of the nation. Wahat Al Karama is a place where HH Sheikh Khalifa bin Zayed Al Nahyans vision to immortalize the memories of the heroes of the country, comes to life. The massive expanse of the 46,000sqm wide monument is symbolically located between the Sheikh Zayed Grand Mosque and the General Headquarters of the UAE Armed Forces, using 31 massive aluminium-clad tablets each leaning on the other, signifying the unity, solidarity and mutual support that bind together the leadership, the citizens and the servicemen and women who protect them.

Qasr Al Hosn is the oldest and most significant building in Abu Dhabi, holding the citys first permanent structure; the watchtower. Built around the 1790s, the commanding structure overlooked the costal trade routes and protected the growing settlement established on the island.

Qasr Al Hosn comprises of two major iconic buildings: the Inner Fort (originally constructed in 1795) and the Outer Palace (1939-45). Over the centuries, it has been home to the ruling family, the seat of government, a consultative council and a national archive; it now stands as the nations living memorial and the narrator of Abu Dhabis history

A lavish property is world renowned for its unparalleled Arab-esque essence, and award-winning 5-star hospitality and authentic local experiences. Located in the heart of Abu Dhabi, Emirates Palace is outstanding in both its design and offerings. From a 1.3 km pristine private beach to landscaped pools and a private marina overlooking a natural bay, the iconic hotel is perfect for a once-in-a-lifetime holiday or for events and meetings within the citys largest hotel conference centers.

During daytime, the hotels golden exterior contrasts with its surrounding greenery, silvery water fountains and the blue sky. At night, the hotels lighting changes subtly, featuring a majestic rainbow effect over the main dome. The main Palace building stretches over a kilometer from wing to wing, and its gardens spread across 100 hectares. The hotel features 114 domes, with the central dome at an imposing 72.6 meters above ground crafted meticulously with gold, mother of pearl and crystals. The Palace also boasts 1,002 chandeliers, the largest weighing 2.5 tonnes. Another memorable feature is its two handmade wall displays, portraying the Palace itself.