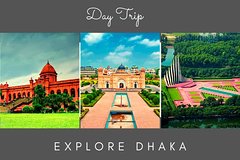 Lalbagh Fort is an incomplete 17th century Mughal fort complex that stands before the Buriganga River in the southwestern part of Dhaka, Bangladesh. The construction was started in 1678 AD by Mughal Subahdar Muhammad Azam Shah who was son of Emperor Aurangzeb and later emperor himself

hsan Manzil was the official residential palace and seat of the Nawab of Dhaka. The building is situated at Kumartoli along the banks of the Buriganga River in Dhaka, Bangladesh. Construction was started in 1859 and was completed in 1872. It was constructed in the Indo-Saracenic Revival architecture

Jatiya Sangsad Bhaban or National Parliament House, is the house of the Parliament of Bangladesh, located at Sher-e-Bangla Nagar in the Bangladeshi capital of Dhaka. Designed by architect Louis Kahn, the complex is one of the largest legislative complexes in the world, comprising 200 acres

The Bangladesh National Museum, is the national museum of Bangladesh. The museum is well organized and displays have been housed chronologically in several departments like department of ethnography

The Shaheed Minar is a national monument in Dhaka, Bangladesh, established to commemorate those killed during the Bengali Language Movement demonstrations of 1952 in then East Pakistan