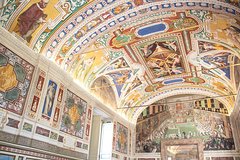 See the famous sights of the Vatican City with this fantastic half-day tour, accompanied by an expert guide. You will not waste time in lengthy queues. You'll witness the highlights of the Vatican's extraordinary collection of Ancient Roman and Greek statues, Raphael's Rooms, the Galleries of Tapestries and Maps, the Sistine Chapel, and Saint Peter's Basilica and Square.

This tour will show you the greatest works of art and architecture in the Vatican. You will be met by your guides at the Vatican Museums and skip the queues with your reserved tickets.

The first steps on the tour will be an array of ancient Roman and Greek sculptures from the excavations across Rome. The Vatican will be held at the archaeological discoveries when the Popes ruled Central Italy. This part of the tour will include the Apollo, the Torso, the busts of Claudius and Hadrian and the sarcophagi of Helen and Constance, the mother and daughter of Emperor Constantine.

Next you'll enter the Room of Animals followed by the Gallery of the Candelabra where you can view the inspiring statues of Diana of Ephesus, the Muses and many Greek philosophers.

After the Gallery of the Candelabra, you'll see the Gallery of Tapestries, the Sobieski Hall and Raphael's Rooms. The latter were decorated by Raphael for Pope Julius II, who used the rooms as his private apartments. These rooms are home to two of Raphael's greatest works: the Parnassus and the School of Athens.

Italy's most visited attraction, is the Sistine Chapel. Michelangelo's frescoes - The Last Judgment, the Creation of Adam and the Genesis - and details on the Stories of Moses and Jesus painted by Botticelli, Perugino and other masters of the Renaissance. The Sistine Chapel is still used today, most notably for papal elections. From your guide you'll hear fascinating anecdotes and little-known facts about this renowned place.

After the Sistine Chapel, you will see Saint Peter's Basilica - the most significant Catholic church in the world - home to another masterpiece by Michelangelo; La Pietà, in addition to viewing the tombs of Popes John XXIII and John Paul II.

The tour will end in Saint Peter's Square, where you can view Bernini's statues and the famous chimney which announces the election of a new Pope. Say goodbye to your guide, say goodbye, leaving you to enjoy the square under your own steam. A wonderful end to a tour of the Vatican!

Special Offer - Book by February 12 to save 20% off our previously offered price! - Book Now!