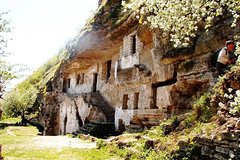 First point of the itinerary will be Saharna Monastery which is located 120 km from Chisinau. The monastic complex is a nature reserve. Its territory contains 670 ha of land and is under government protection.

Next point of the itinerary would be Tipova Monastery - one of the oldest monasteries in Moldova, carved in stone on a bank of the Nistru river.

Your tour will conclude with drop-off back to your hotel or rented apartment.

Initially the monastic complex embodied a small hermitage  Horodiste and a small church dug into the rock honoring of the feast of the Annunciation. In 1776, the monk Vortolomeu Crungul and several other monks came from Russia and settled the complex. They repaired the church and its cells. The hermitage church was built in 1776 in honor of the feast of the Assumption.

In 1863, Abbot Serafim built another church for winter services and a series of cells were built. It was in honor of the feast of the Holy Virgin Mother of God.

From 1776  1919, there were twenty-four different abbots who led the monastery. The Saharna Monastery was closed in 1964. All the monks were expelled. It was then used as a store-house for a boarding school. The Holy Trinity church was used as a hospital warehouse. The church for winter services served as a dance hall. It functioned as such until 1990, when at the request of local citizens, the monastery was reopened.

In 1992, all monastery cells including the refectory, canteen and the priory were refurbished.

Located in the area with the same name, Tipova Monastery is one of the oldest monasteries in Moldova. The monastery is carved in stone on a bank of the Nistru River.

The monastery is comprised of three monastic complexes. The first complex consists of a church named for the feast of the Holy Cross and some cells. It is far from the other two and hardly accessible. The foundation of the complex dates from XI  XV centuries. In the second monastic complex is the church of St. Nicholas. It was carved in rock the in XIV  XV centuries. The third complex dates from the XVI  XVIII centuries and encompasses 18 separate rooms joined via an interior passage.

But in 1949, the complex was closed and dispossessed of its lands. The monks took refuge at other monasteries. The complex on the hill was taken over by local agricultural concerns. The church became a tobacco warehouse. The hermitage was cleared out and demolished.

In 1990, a group of archeologists from Saint Petersburg found a skeleton in the monastery basement, dating from the end of the XV century.