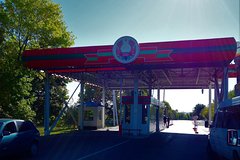 Tour of Tiraspol is a unique experience because give you an understanding how people use to live in the Soviet Union.
On the streets you can met people that are nostalgic about Soviet Union and the atmosphere will make you think of that period.
Book this tour if you want to see modern day Soviet city!

Visit to Bender Fortress that dates back from the 16th century, build by the Moldavian ruler Stefan cel Mare as a part of the defense chain on the Nistru river. In 1538, as the city became the part of the Ottoman empire the sultan Suleiman the Magnificent rebuild in stone the fortress and renamed the city as Bender. Now in the fortress can be seen the museum, the torture chamber and other well preserved sites.

Tiraspol, at the present moment the administrative center of the self proclaimed Transnistria (Moldova). Feel the atmosphere of this disputed territory which always has been a battlefield between the major powers of the region. The buildings of the Soviets, the monument of Suvorov, Central Plaza.