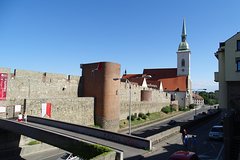 Growing town and flourishing commerce attracted Jewish merchants, who settled in Bratislava, then Preslava/Pressburg, in the 13th century. It became an important Jewish centre of the Hungarian kingdom and pre-WW2 Slovakia.The catastrophe of WW2 and post-war emigration depopulated the Jewish quarter and Bratislava lost one of its characteristic features - Jews living next to the parish church in the oldest part of the town. We are going to trace the almost invisible community that has been living in Bratislava for more than 700 years.

We will meet in front of the Opera House on Hviezdoslav Square (Hviezdoslavovo namestie) because the oldest Jewish quarter once existed just behind the corner. You will learn many surprising details about medieval Hungarian Jews and the first Bratislava community. Afterwards we will visit the Holocaust and neolog synagogue monument. We will continue to the virtually lost Jewish orthodox quarter that used to house a yeshiva, a synagogue and a functionalist kosher canteen (the only monument left). Later on we will return to the Old Town and talk about various interesting Jewish figures - a collector of Jewish antiquities, a brave lady, a bookseller, an artist and a jeweller. We will visit the site of mikveh and the second medieval Jewish quarter. The end of our tour will be in front of the only functioning synagogue in Slovakia. Visit of the synagogue is also possible upon previous request.