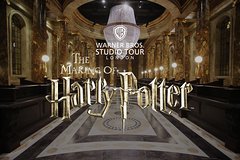 Get a behind-the-scenes look at the Harry Potter film series with the Warner Bros. Studio Tour London. Enjoy round-trip transport from central London to the Harry Potter film studio to enter the magical world of Harry and his friends. You'll see how the movies were created as you tour the real movie sets, admire the costumes and props, and learn about the special effects and animatronics used to create the films' stunning visuals. Explore the Great Hall, pose next to the original Hogwarts Express, set foot down Diagon Alley and more.

Board a double-decker bus in central London and drive 17 miles (27 km) northwest to the English borough of Hertfordshire. Arrive in the town of Watford, home to the Warner Bros. Studio Tour London, where you'll witness the legendary Harry Potter film series come to life.

Set off independently to explore the real sets used in these iconic movies. Imagine walking side-by-side with Harry, Ron and Hermione as you explore the Great Hall, view Dumbledore's office and stroll down Diagon Alley, featuring the storefronts of Ollivanders wand shop, Flourish and Blotts, the Weasleys' Wizard Wheezes, Gringotts Wizarding Bank and Eeylops Owl Emporium.

Admire the costumes and props used by Harry and his counterparts, and learn about the special effects and makeup that brought magical characters such as Dobby and the Death Eaters to life. Remember to bring your camera  there are exciting photo opportunities around every corner.

Cap your visit at Platform 9 ¾, where you can get a glimpse into how some the films most iconic scenes were created. Pose with a luggage trolley as it disappears through the platform wall, and get up close to the original Hogwarts Express steam engine. Marvel as steam billows from the 78-year-old engine and admire the platforms glass roof, yellow brick walls and luggage racks.

On your drive back to London, sit back and reminisce on your fantastic day in the magical world of Harry Potter.

Special Offer - Book by January 23 and travel between January 7 and January 23 to save 15% off our previously offered price! - Book Now!